Saga of a Star World

The Human-Cylon peace accords are a ruse by the genocidal Cylons, determined to exterminate all humanity. Only the battlestar Galactica and a ragtag Fleet survive, journeying across the galaxy in search of a long-lost sister civilization, Earth. On the first leg of their journey, the Fleet is lured to the planet Carillon for fuel and relaxation—and barely survives a trap by the Ovions, an underground, insectoid species in league with the Cylons. 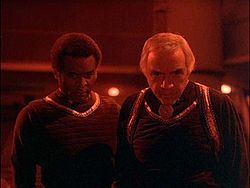 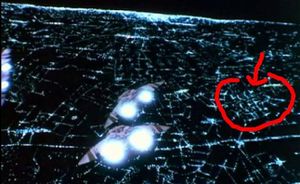 The infamous Lights of Caprica scene! 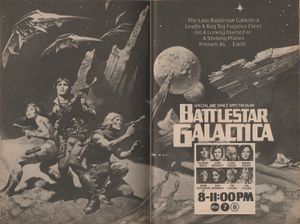 TV Guide ad for Saga of a Star World 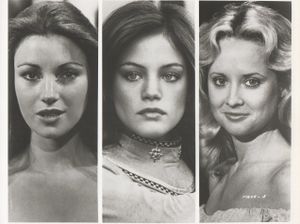 The Path to Carillon 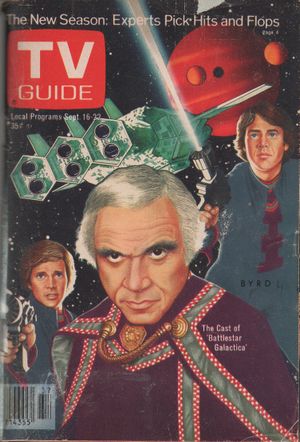 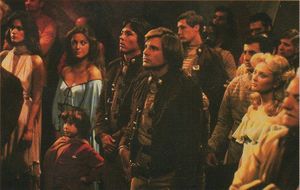 The Anthem scene - A deleted scene occurring after the flight from Carillon in which the entire cast attends a ceremony, and Apollo learns of Serina's illness.

The Battle of Carillon

And the word went forth to every outpost of humanity, and they came - the Aries, the Gemons, the Virgos, the Scorpios, the Pisceans and the Sagitarrans. In all, two hundred and twenty ships, representing every colony, color and creed in the star system. The human race might have one more chance, but first it would have to survive the alliance, the elements and the unknown dark and sinister threats that would lie ahead.

We've come so far, so quickly. There's been little time for reason. What is the secret behind the existence of this outpost on the outer rim of our star system? There are many such oases for intergalactic travelers, but none so far off the known arteries of trade, and none so curiously close a tylium mine. Fuel has begun to arrive from the Ovion mines, but in curiously small quantities. Now I feel the growing need for extraordinary measures of precaution. The ships continue to hover over the planet, supported by maintenance crews whose spirits are depleted as their numbers. Everyone seems to have forgotten our flight from the Cylons. The beauty and wiles of Carillon hold our people spellbound.

Richard Hatch: "Most companies have to continuously cut corners, settle for less than the best. Not Galactica. We still have to work quick, and there's only so much money, but the producers are determined that everything be the best it possibly can be. They know it's the little places that count. For instance, we have these alien creatures that feed on human flesh. In one shot of them, the lighting wasn't quite right, and their walk was just not convincing. They could have let that go, but they went back and reshot the entire sequence to get the right look, the right texture."[3]

It seemed to be, because...I mean it's just that I don't understand it. When you set something loose like that, you've either got to step in and carry the thing yourself, and finish it yourself, or somebody's got to come in and do it. Well, that's kind of what I did for George [Santoro]. George had always been very good to me, and when he need help, I was there for him. So it wasn't about Glen [Larson]. It was about making this thing work for George, and when in the end Glen kept finding little faults, I just told him he was an ungrateful bastard, because everybody was working so hard to pull his ass out of the fire here, and now he's in there pretending like he's the one who has all the ideas here. Well it was his idea originally. Nobody can fault him for that. You know, it's him and the Mormon church. So if you say ok, this is mine, well that's just fine, and I applaud his ability for all of the work that he's able to do in television, all of those opportunities that he saw in movies and then made television shows out of, all that stuff that he was able to convert. So I could even understand where he would want to feel like he was back in control of it once the major roaring fire of this thing was out, and some hope was in the air, but I just found him very ungrateful to all the people who worked so hard for him.[4]

Glen [Larson] didn’t like the way the exterior of the casino was shot, just didn’t have any great feeling of murder and escape and such. That was my first night of shooting, and everybody’s looking at me like I’m the new kid on the block and they’re going, ‘you want me to do what?’ And I’m screaming through the megaphone and people are running back and forth and this and that and the cameras are racing from here to there…well, I wore everybody out, but it turned out to be a good sequence. It did kind of put a feeling of respect for me in people’s minds as to what I was after.[5]

[T]his still holds up, after all this time. Not that I was necessarily surprised by that, but it was nice to see. Because a lot of shows you have fond memories of and then you see them years later and you go: "Oh, geez..."[6]

Adama: Forgive me, Mr. President, but they hate us with every fiber of their existence. We love freedom. We love independence—to feel, to question, to resist oppression. To them, it's an alien way of existing they will never accept.

President Adar: What was that?
Adama (sotto voce): That was my son, Mr. President...

Imperious Leader: The final annihilation of the life form known as Man, let the attack begin.

Serina: We must fight back.
Adama: Yes, we are going to fight back. But not here. Not now. Not in the Colonies. Not even in this star system. Let the word go forth to every man, woman, and child that survived this holocaust. Tell them to set sail at once in every assorted vehicle that will carry them.

Adama: Our recorded history tells us that we descended from a mother civilization, a race that went out into space to establish colonies. Those of us here assembled now represent the only known surviving colonies save one—a sister world far out in the universe, remembered to us only through ancient writings. It is my intention to seek out that remaining colony, that last outpost of humanity in the whole universe.
Serina: Commander Adama... This Thirteenth Colony—this other world—where is it and what is it called?
Adama: I wish I could tell you that I know precisely where it is, but I can't. However, I do know that it lies beyond our star system, in a galaxy very much like our own, on a planet called... Earth.

Boomer: Just keep it up, old buddy. You're going to get us into real trouble.
Starbuck: 10,000 light years from nowhere, our planet shot to pieces, people starving, and I'm going to get us in trouble?
Boomer: All I'm saying is—
Starbuck: What's the matter with you? I tell ya, may as well live for today. We might not have many left.

Adama: You didn't see them down there. Their faces—the old, the young—desperate. Begging, screaming for a chance to come aboard—a chance to live. And there I was like God, passing out priorities... as if they were tickets to a lottery. There was one—one woman... with a child in her arms. She tore at my arm as I was boarding the launch to come back.
Athena: Father, don't—
Adama: Guard came up. I saw him out of the corner of my eye and tried to stop him. He shoved her away, pushed her. He didn't see the child. I don't know what happened to that woman. But, God, I don't want it anymore. Let someone else do it.
Athena: Father?
Adama: Take this burden from me.

Serina: Thank you.
Apollo: For what?
Serina: For saving my son's life.
Apollo: You're getting things a little out of proportion... In a way, maybe I should be thanking you.
Serina: You don't know anything about me, or what happened to Boxey's father, or...
Apollo: When you're ready, you'll tell me. In the meantime, nothing that's happened before really counts for much. As far as the human race is concerned, we're all starting over.