Tylium is a fuel used in both the Original Series and Re-imagined Series. 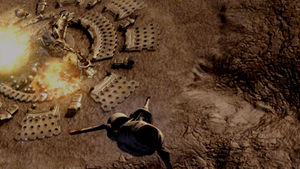 Apollo destroys a Cylon base to win supplies of tylium.

Tylium is a material used to fuel the propulsion systems of Colonial and Cylon spacecraft. At least three forms exist: tylium ore, refined tylium precursor, and refined tylium (the fuel itself).

Typically, tylium ore is mined from asteroids and is apparently not found on the Twelve Colonies natively. Large tylium ore deposits can keep fleets fueled for years (TRS: "The Hand of God"). In its raw form, tylium is a relatively fine, powdery substance that is liquefied and refined by refinery ships. Care needs to be taken to not introduce impurities into the fuel, which can cause engine malfunctions (TRS: "Dirty Hands").

According to Dr. Gaius Baltar, tylium has the following characteristics:

Pure tylium can be easily detonated by a conventional warhead. Moreover, igniting fuel lines on spaceships usually quickly result in their loss (TRS: "Miniseries, Night 1"). The fuel can also be used to construct improvised mines (TRS: "The Eye of Jupiter").

Practically nothing on the fuel is mentioned in the Original Series.

In the Original Series, the term was pronounced as "TIE-lee-um" as opposed to "TILL-lee-um" in the Re-imagined Series, as heard in "Saga of a Star World".