Colonel Tigh is the executive officer (XO) of the battlestar Galactica and is a close personal friend of Commander Adama. Tigh has a no-nonsense demeanor that assures that the day-to-day operations and efficiency of his battlestar remain consistent. His friendship with Adama allows Tigh the ability to speak frankly in matters of protocol and defense. A former pilot himself, Tigh is stricter on the younger Colonial Warrior's behavior as he is all too aware of their importance as well as their tendencies (and need) to become rowdy.

In his younger days, Tigh flew a Viper with Adama (TOS: "Saga of a Star World"). 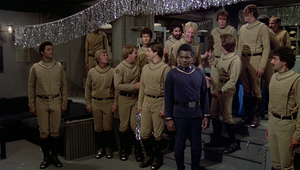 Tigh orders the party to be in full swing (TOS: "Lost Planet of the Gods, Part I").

Despite his reputation for being strict regarding regulations and discipline, Tigh reveals a lighter side when he covers for Greenbean in front of Council Security. After security leaves, Tigh light-heartedly reprimands Greenbean, before ordering that Apollo's bachelor party be in full swing when he and Starbuck return from their patrol. Colonel Tigh is more of a sceptic than Adama, and is quite concerned when Adama orders the Fleet to head into the magnetic void (TOS: "Lost Planet of the Gods, Part I").

When Cylon Raiders attack while Adama is on Kobol, Colonel Tigh commands Galactica in his absence. Tigh is surprised when the previously ill pilots report for duty during the battle. He points out that they are barely able to stand, to which Boomer replies that it is fortunate that the Viper is flown in the seated position (TOS: "Lost Planet of the Gods, Part II").

When Adama is reluctant to send out a patrol to search for the lost Apollo, Tigh is able to convince him otherwise. Boomer and Starbuck are already waiting in the launch tubes, and successfully find Apollo and guide him back to Galactica without attracting the attention of the Cylons (TOS: "The Lost Warrior").

Adama volunteers Colonel Tigh to help him cover Athena's shift in Core Command so that she can go on a date aboard Rising Star (TOS: "The Long Patrol").

On Colonel Tigh's suggestion, Adama orders the Fleet to maximum speed (rather than moving at the speed of the slowest ship) as they neared the Ravashol pulsar. They hoped to make the ships of the fleet more difficult targets by increasing the spacing between the ships, and reduce the collateral damage inflicted should one of the ships take a hit from the pulsar. Fortunately the pulsar is destroyed before the Fleet gets into range (TOS: "The Gun on Ice Planet Zero, Part II").

After Cylon Raiders destroy two of the three Agro Ships, Colonel Tigh personally inspects the only one that survives. He learns that the fleet's entire crop supply has been destroyed in the attack and that the fleet's supply of seed has been exhausted and must be somehow replenished. This prompts Adama's mission to Sectar to trade an energizer for the needed seed (TOS: "The Magnificent Warriors").

Picking up a great deal of civilian Cylon radio traffic, Tigh reports that a large concentration of Cylons are nearby. Adama orders the Fleet to a halt, awaiting word from the recon patrol. Before the patrol can return, Colonel Tigh reports a large contact approaching. It appears to be a battlestar, and a communication comes in on Fleet Com-Line Alpha (which is only used between Colonial warships). Adama believes the message to be a hoax, as they are the last remaining Colonial war ship. Adama is delighted to learn that the message is from Commander Cain, and the sensor contact is Pegasus.

The honeymoon does not last long, however. Adama is forced to relieve Cain of command of Pegasus when he refuses to redistribute fuel from his ship to the other ships in the Fleet. Adama appoints Tigh to take command of Pegasus. Tigh takes his place on the bridge of Pegasus, and insists on beginning the fuel transfer over Tolan's objections. Before any transfer can take place, though, Cylon Raiders attack. Cain has his command returned to him, and the crew of Pegasus cheers when they hear the news. Tolan asks Tigh not to take the cheers personally. Tigh understands and asks, "How can you fight a living legend?" Colonel Tigh resumes his role as executive officer aboard Galactica (TOS: "The Living Legend, Part I").

As a Cylon attack approaches, Adama and Tigh begin to realize that the Cylons are attacking in force. They order the ship's compartments to be sealed, to prevent a hull breach. All squadrons are launched to defend Galactica. The Raiders are not fighting back, and two manage to slip through. One is destroyed near the bridge. Despite closing the blast shield the bridge sustains heavy damage, and Adama is critically wounded. Tigh orders Omega to call for Dr. Salik to take care of Adama, and assumes command. The other Raider explodes against the port landing bay, causing explosions fires throughout the ship. Tigh realizes that the Raiders were likely packed with Solonite or some other high explosive, in order for them to have exploded with such force. The explosions have damaged the ship's automated firefighting systems. A plan to extinguish the fires using Vipers firing boroton fails. Tigh puts mushies near the air ducts in hopes of helping Muffit find them. Muffit appears out of the Core Command air ducts, and they attach a note and some lifemasks to him so that he can ferry them back to the trapped survivors in the rejuvenation center. Muffit completes his task, delivering the lifemasks and the note. The fire is successfully extinguished by Apollo and Starbuck, and Adama recovers from his successful surgery (TOS: "Fire in Space"). 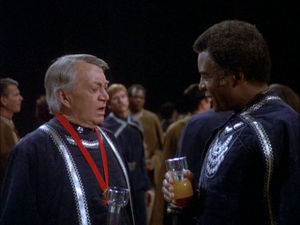 After a hard-fought game of Triad, Apollo, Boomer, and Starbuck are informed by Colonel Tigh of an emergency meeting in the war room. Bojay's patrol has gone missing. The warriors are deployed to investigate, but Tigh doesn't like the looks of the seismic readings, and is afraid Bojay's patrol has crashed. The patrol discovers the wreckage of a ship, and returns with Count Iblis. Colonel Tigh is immediately suspicious of Iblis. Tigh later informs Adama that Iblis had visited Core Command, and Adama is furious. Tigh is in Core Command with Adama when the mysterious lights begin appearing around the Fleet (TOS: "War of the Gods, Part I").

Colonel Tigh presents Commander Kronus with the Star of Kobol during an award ceremony, while Adama gives the speech. At the reception afterwards, Commander Kronus berates Colonel Tigh for drinking before going on duty. Tigh accepts the criticism, and respectfully leaves the reception early to get to his work. Later in Core Command, Starbuck requests permission to take his Viper aboard the Celestra under the pretense of a "maintenance scan" of his Viper's electronics. Tigh isn't convinced, but grants permission to the warrior. He also informs Cassiopeia, who reclaims the concert tickets from Starbuck in the Viper bay (TOS: "Take the Celestra").

Commander Adama and Colonel Tigh are alerted by Apollo, Starbuck, Cassiopeia, and Sheba of the Gamma frequency signal they receive in the Celestial chamber. A Viper patrol is launched to investigate, and discovers a Cylon basestar. Adama is tired of running, and wants to launch an assault against the basestar, in a bid to escape the Galaxy without Cylon pursuit. Colonel Tigh briefs the Viper pilots on the capabilities of the basestar, painting a grim picture of the situation. The attack is successful, and Galactica escapes the galaxy, hoping to find Earth (TOS: "The Hand of God").