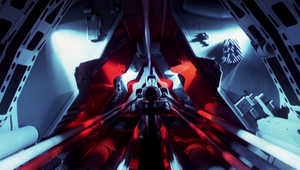 A Viper ready to launch (TOS: "Saga of a Star World").

Launch tubes are the primary mechanism for launching the Viper fighter craft from a battlestar.

In a battlestar the launch tubes are located in within the two quasi-cylindrical nacelles located port and starboard of the ship. Each nacelle has 16 launch tubes, which are slanted towards the battlestar's aft. Designed solely for Viper craft, each of the sixteen launch tubes has a track in the launch bay where the Viper sits prior to launch.

Vipers are launched when the pilot is given the "Launch when ready" command. The pilot initiates the launch by activating the turbo thrusters on the Viper. This quickly accelerates the Viper, slamming the pilot into the back of the seat and sending the fighter through the launch tubes and out into the stars.

Launch tubes are equipped with surveillance equipment that is accessible by Core command. Athena uses the camera to catch Starbuck and Cassiopeia seeking some privacy in a launch tube. Athena activates a steam purge, which is likely intended for maintenance purposes more than for burning unfaithful Viper pilots (TOS: "Saga of a Star World").