For information on the 2003 "Re-imagined" miniseries and regular series of the same name, see Battlestar Galactica (RDM).

For information on the short-lived Original Series spin-off, see Galactica 1980.

The original 1978 premiere of Battlestar Galactica was the show that began the saga of humanity's survival against the Cylons.

Battlestar Galactica (also known as the Original Series on this wiki to differentiate it from its Re-imagined Series counterpart) was created by Glen A. Larson. The show concept gradually evolved from an earlier project titled Adam's Ark. Although Larson had first proposed Ark in the late 1960's, it was not until 1978, after the success of Star Wars, that interest in the show developed.

Initially envisioned as a series of TV movies for ABC, which would consist of a three hour premiere and two additional movies of two hours in length[1], Battlestar Galactica was ultimately developed into a regular television series. The "first seven hours" of the series, consisting of "Saga of a Star World", "Lost Planet of the Gods", and "The Gun on Ice Planet Zero", was reported to have cost–"at over one million dollars an hour", according to Galactica's publicist, Joe Santley–over $7 million dollars[1]. However, this figure is contradicted by Richard Colla, who revealed that the budgets for the three-hour pilot were nine million dollars alone, despite the fact that it was sold to ABC for 1.8 million.[2]

To defray costs, the three hour premiere was re-cut as a theatrical release. Several weeks before the TV series premiered in America, the series pilot appeared as a two hour film in Canada, Europe and Japan. Opening on July 7, 1978, the theatrical release did quite well, given modest expectations.

The three hour Galactica pilot first broadcast on ABC on September 17, 1978. For the next eight months, 17 original episodes of the series were aired, totalling 24 hours of broadcasting. 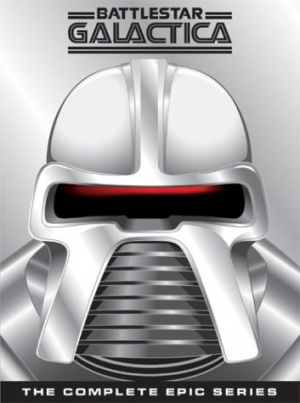 The artwork for the Complete Epic Series DVD package

During its single season, the series went through a few phases, as the Fleet got farther away from the Colonies, and closer to Earth. After the initial series pilot, where the Fleet visited Carillon, the next stop was the mythic planet Kobol where the ancient birthplace of humanity was found. Together, these two stories established the mythos of the series.

Next, there were a series of episodes where the Colonials visited lost colonies such as Equellus, Proteus and Antilla.

In the middle of the season were some two part episodes that established foils for Commander Adama with the introduction of Commander Cain and Count Iblis.

Then, there were some episodes that focused on the life of the Fleet, focusing on characters such as Chameleon. This was followed by a series of episodes based around the Terra arc.

Lastly, the Cylons, who had been absent for awhile, were reintroduced in the final episode of the series.

There are two different opening narrations, both narrated by Patrick Macnee, who portrayed Count Iblis and was the voice for the Imperious Leader during the series' run.

The opening narration to "Saga of a Star World":

"There are those who believe that life here began out there, far across the universe, with tribes of humans who may have been the forefathers of the Egyptians, or the Toltecs, or the Mayans. They may have been the architects of the great pyramids, or the lost civilizations of Lemuria or Atlantis. Some believe that there may yet be brothers of man who even now fight to survive far, far away, amongst the stars." — watch (watch • help)

The opening narration used starting from "Lost Planet of the Gods, Part I":

"There are those who believe that life here began out there, far across the universe, with tribes of humans who may have been the forefathers of the Egyptians, or the Toltecs, or the Mayans. Some believe that there may yet be brothers of man who even now fight to survive, somewhere beyond the heavens." — listen (listen • help • info)

The closing narration was voiced by Lorne Greene and began in the episode "Lost Planet of the Gods, Part II":

"Fleeing from the Cylon tyranny, the last Battlestar, Galactica, leads a ragtag, fugitive fleet, on a lonely quest—for a shining planet known as Earth."

In recent years, Glen Larson's son, Chris, discovered various memorabilia from his father's personal collection. In addition to packets for the official Battlestar Galactica Fan Club, he also came across a treatment for the second season of Battlestar Galactica. In the treatment, many changes were proposed, including the reduction of the cast size, the addition of Issac Asimov as a story and science consultant, and massive character changes.

While it is uncertain as to whether this document ever made it to Universal Studios, the document does shed light on the origin of various concepts introduced in Galactica 1980. These concepts included the human android Cylons, the concept of Boomer being Galactica's executive officer, and the character of "Troy".

Cancellation and Rebirths (of a sort)

Citing declining ratings and cost overruns, ABC canceled Battlestar Galactica in April 1979. Its last episode, "The Hand of God", was broadcast on April 29. Fans were generally shocked to find the series canceled as viewership was reasonably robust. However, after some years, some fans believe that ABC pulled the plug on the show after ratings began to drop after network executives ordered changes to storylines that resulted in a less appealing, "family oriented" format, as well as a distaste for the show and desire for more profitable fare. Some fans were more philosophical, believing that a continuation series or revival was possible, as it was for shows such as Star Trek and Night Gallery.[3]

After the series's cancellation, the pilot was edited together into a new theatrical release, with certain scenes trimmed or edited out completely. This release is notable for the incorporation of the Sensurround enhancement system first introduced in the film Earthquake in 1974, and is considered by most critics as perhaps the only film where the technology was used properly. It was, in fact, the last of only four films ever released in the US to feature Sensurround.

Special effects shots from the series were reused in the low-budget 1988 film Space Mutiny, which later had the dubious honor of being mocked on Mystery Science Theater 3000.

A news story in fandom was reported on the suicide of a 15-year-old boy named Eddie Seidel, Jr., who jumped 200 feet from a bridge out of despair of the series' cancellation.[4]

A series spin-off did appear some months later in the form of Galactica 1980. Despite initially promising ratings, the show became victim to questionable writing that was heavily influenced by science fiction clichés. The show was generally panned by critics and fans alike (with the exception of its last episode). Galactica 1980 was canceled after only 10 episodes.

Despite three attempts over the years to launch a continuation motion picture or series (the Battlestar Atlantis project from Glen Larson, the Battlestar Galactica: The Second Coming project by Richard Hatch, and the studio-endorsed Singer-DeSanto project), it would be approximately 23 years later before Battlestar fans would see a new series, but as a reboot, or "re-imagined" version where the central theme remained, but a far darker storyline and significant character changes that would introduce a new facet in the Battlestar universe.

The Battlestar Galactica (2003 game) was created to encompass elements of both the original series and the re-imagined series, but, as such, is in a separate continuity.