This article discusses the long war between the Cylons and humanity in the Original Series. For information on the first war between the humanity and their robotic creations in the Re-imagined Series, see Cylon War.

Coverage of the disparate separate continuity variations of this conflict are covered in Thousand-Yahren War (alternate). 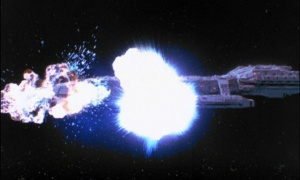 The flagship of the Colonial Fleet is destroyed in the Cylon coup de grâce (TOS: "Saga of a Star World").

The Thousand-Yahren War is the primary conflict between the Cylon Empire and an intergalactic federation including the Twelve Colonies of Man.

This conflict began when the Colonies aided the Hasari in taking back "their nation" from the Cylons.[1] The exact nature of the Hasari and their relationship to the Colonies remains unknown (TOS: "Saga of a Star World").

Battles of the War

The following were known events during this conflict, in chronological order:

Effects of the War

Given the war's duration, it appears that efforts normally occurring during peacetime were curtailed. Apollo mentions to Zac that they would be able to resume deep space exploration should there be peace with the Cylons (TOS: "Saga of a Star World"). The Rising Star's maitre d' states that the festivities during the departure from their home galaxy remind him of a "time before the war" (TOS: "The Long Patrol"). This might suggest that there were lulls between major battles of reasonable length, or he might very well have been speaking of the time before the exodus from the Colonies.

In addition, the Colonials set up numerous colony worlds far outside their galaxy, which included the prison planet of Proteus (TOS: "The Long Patrol") and agricultural settlements such as Sectar (TOS: "The Magnificent Warriors"). These planets became cut-off from the Twelve Colonies, resulting in a loss of technological advancement, even regression; Proteus, for instance, uses Sixth-millennium starfighters that predates the mainstay seventh millennium Colonial Viper (TOS: "The Long Patrol"), heavily suggesting that the war took its toll on the supply and transportation lines between the main colonies and their smaller intergalactic interests to the point where whole worlds and outposts were forgotten about.

The Thousand-Yahren War ends at the Battle of Cimtar. Lord Baltar, a Colonial double-agent for the Cylons, tricks President Adar into believing the Cylons wished to negotiate a truce. The peace conference is a ruse, allowing a force of one thousand Raiders to destroy four of the five battlestars, including Adar's Atlantia, while a basestar fleet (and additional Raiders) destroy the Twelve Colonies (TOS: "Saga of a Star World").

With Baltar's agent, Karibdis, neutralizing the Colonial defense systems on Caprica, the Cylons are able to attack the planet without planetary resistance (TOS: "Murder on the Rising Star"). Strafing runs and pluton bombs are used to devastating effect by the Cylon assault forces.

The final attack takes several centares. Reports transmitted from Sagitaria indicate that it was "in flames", which is likely the same situation echoed throughout the Colonies.

As an end result, countless[2] humans are killed and the Colonies are neutralized as a home for the Colonials.

From the ruins of the Colonies, surviving Colonials are gathered into a motley fleet of 220 civilian ships and are escorted to safety by the last surviving battlestar, Galactica (TOS: "Saga of a Star World").

In the Berkley novelizations, Adama states in his journal that the conflict began when the Cylons attacked Colonial merchant ships (destroying them by the thousands) and, later on, sent an attack fleet to the Twelve Colonies. This attack was repulsed by a prepared Colonial military, which began the thousand year[3] war.[4][5]