Joining forces with the imprisoned Borellians and the Eastern Alliance detainees, Baltar escapes from the prison barge, hijacks a shuttle, and kidnaps members of the ruling council. 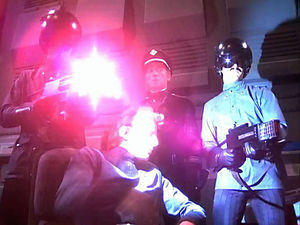 Since the return of our warriors with the prisoners from the Alliance of the planet Terra, the fleet has been in a state of constant confusion. If this Terra is in fact the planet Earth it is we seek, our flight across the universe may have been in vain. For we will have eluded the Cylons only to be faced by an equally oppressive human enemy. As usual of late, the Council, led by Sire Domra, is in total opposition to me. They wish to release the prisoners and to have an unarmed peace envoy with them to their outpost on Lunar Seven. I am afraid that the Council is bent on repeating the same mistakes that led to the destruction of our colonies at the hands of the Cylons. I am determined that shall not happen again so long as I am in command. In the meantime, I have ordered the fleet to full alert and taken a shuttle to the prison barge to interrogate personally the Eastern Alliance enforcers.

Starbuck: Baltar, Nomen and the Enforcers. At least we have all our enemies in the same place!
Apollo: Including the Council!

Baltar: Well, now, Lt. Boomer! How nice to see you. Too bad Starbuck and Apollo aren't here. I could settle all my debts at once.