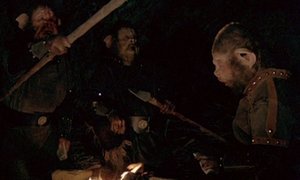 The Borays spot the full moon.

While the Borays originally were an agrarian race, they find that it is easier to take what they wish from the humans at the Serenity settlement during full moons, rather than raising the crops themselves.

Led by Nogow, the Borays return to their farming ways after their leader becomes the constable of Serenity (TOS: "The Magnificent Warriors").

Despite the social and economical disconnect between the Colonies and Sectar, Colonials knew of the Borays. It is quite likely they are the origin for the negative saying, "borays of humanity", which is used to describe the denizens of the freighter Gemini to Apollo by a survivor who is ejected from Rising Star (TOS: "Saga of a Star World").

Described as "intelligent pre-technological beings", they "live in herds, under the absolute leadership of one dominant Boray". Prior to the settlement of Sectar[1], they were "peaceful farmers living by simple agriculture". The humans' arrival lead the Borays to raid the humans' settlements for supplies, riding "horned stallions" into town by the "light of the full moon", taking "what grain they wanted, killing and kidnapping humans in the process".
It is also claimed that the landing party from Galactica "negotiated a truce between the two groups, under which the humans voluntarily supplied grain in return for guarantees of peace", noting that the permanence of the solution is unknown.[2]