Life Forms known to the Colonies

The inhabitants of the Twelve Colonies know of many different kinds of non-human life throughout the known universe.

While a majority of life encountered in the galaxy is oddly human -- descendants from either the Colonies themselves, or the fabled Thirteenth Tribe -- some life forms are not themselves human, though are humanoid.[1]

Referred to by Adama as the "guardians of the universe", the Beings of Light do not interfere with the others outside of their plane of existence (TOS: "War of the Gods, Part II"), with one notable exception pertaining to the planet Terra (TOS: "Experiment in Terra"). 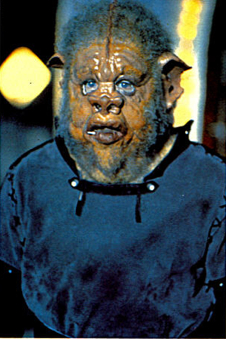 Borays are pig-like humanoids native to Sectar. Initially, the humans who lived on the planet lived in fear of the Borays, for the Borays would raid the town of Serenity of supplies and even women. This changed after Starbuck gave the Borays' chief, Nogow, the role of Serenity's constable (TOS: "The Magnificent Warriors").

The Cylons began as reptilian creatures. Upon discovering humans, they created robots making use of the humanoid form a thousand yahren prior to the fall of the Colonies. Ever since, the Cylons have waged war on life in the galaxy that would threaten the Cylon Empire, the Colonials included.

The Hasari are a nation of people to whom the Colonies provided aid when they were besieged by the Cylon Empire. Their aid to the plighted Hasaris leads to the Thousand-Yahren War with the Cylons, which ultimately leads to the destruction of the Colonies (TOS: "Saga of a Star World"). 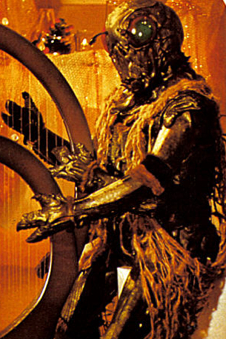 An Ovion musician with a harp.

Ovions are insectoid creatures that manage a mysterious gambler's paradise on the planet Carillon. They are one of the members of the Cylon Alliance. Their extensive tylium mines are an extremely valuable asset (TOS: "Saga of a Star World").

There are various unidentified aliens on Carillon, all of them bi-pedaled humanoids (TOS: "Saga of a Star World").

In addition, both Chameleon and Starbuck mention a "three-handed" dealer on Pineas (TOS: "The Man with Nine Lives").