See also Starbuck (TOS alternate) for depictions of this character in separate continuities.

Starbuck was born on Caprica in the agro settlement of Umbra. He was orphaned when a Cylon raid destroyed the settlement (TOS: "The Man with Nine Lives").

En route to the peace conference, Starbuck allows an eager Zac to take his spot on the reconnaissance patrol. His winning hand at the pyramid game amounts to nothing when the alarm sounds, signaling the beginning of the Cylon Ambush. Starbuck is left behind with the other Vipers when Galactica breaks off to attempt to save the colonies. The Vipers manage to hold their own until Galactica returns with the news that the colonies have been destroyed.

The lieutenant helps to inspect the ships in the Fleet, and process all of the civilians. Aboard the freighter Gemini Starbuck helps rescue Cassiopeia.

Apollo volunteers Starbuck (along with Boomer) to help lead the Fleet through the minefield of the Straits of Madagon. He is part of the initial landram team that discovers the Ovion resort on Carillon. He is selected to receive the Gold Cluster for his efforts in the Straits, as part of a ploy by Sire Uri to disarm the Fleet. After rescuing Boxey, Muffit, and Cassiopeia from the Ovions, Starbuck sets fire to the tylium mines beneath the surface of Carillon. Using deceptive radio communications, Starbuck and Apollo force the Imperious Leader's basestar into the atmosphere as the fires in the tylium mine finally detonate the planet (TOS: "Saga of a Star World").

Starbuck and Apollo discover, and are nearly lost in, a magnetic void. As one of the two Viper pilots not infected by the mysterious illness, Starbuck helps to train the female shuttle pilots to fly Vipers (TOS: "Lost Planet of the Gods, Part I"). Starbuck tries to take over a mission for Apollo and Serina, and ends up being captured by the Cylons. He meets Baltar aboard his basestar. Baltar releases Starbuck, who meets up with the crew down on Kobol. He joins in the ensuing battle, helping to drive off the Cylon Raiders (TOS: "Lost Planet of the Gods, Part II"). 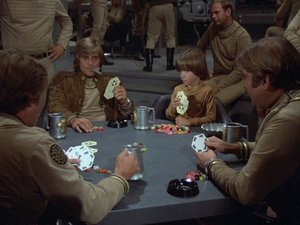 Starbuck teaches Boxey Pyramid to keep his mind off Apollo (The Lost Warrior).

Lieutenant Starbuck desperately wants to help Apollo when he is chased off by Raiders during a recon mission, but is ordered to hold back in order to avoid giving away the Fleet's position. Boomer and Starbuck later pick up Apollo's transmissions and guide him back to Galactica after his ordeal (The Lost Warrior).

Starbuck is the first to test pilot an experimental reconnaissance Viper. Being the test pilot earns him a dining slot on Rising Star where he ends up trying to juggle simultaneous dates with both Athena and Cassieopeia. During his test flight he encounters a Sixth-millennium starfighter attacking a shuttle and intervenes. The pilot of the shuttle ends up stealing Starbuck's Viper, and Starbuck is captured when he flies off with the shuttle. He is taken to a prison where the prisoners are named for the crimes of their ancestors, and are all descendents of criminals. He incites a prison revolt, just in time for Apollo and Boomer to show up (along with Starbuck's missing Viper). Starbuck helps the two of them defeat their Raider pursuers. In the process of destroying the Raiders Starbuck accidentally destroys the vast stores of ambrosa that the prisoners had made, dashing his dreams of making a fortune off of it (TOS: "The Long Patrol").

Starbuck joins the mission to Serenity, where he ends up accidentally winning the constable's badge (and thus the position) in a game of Pyramid. Rather than following the example of previous constables, Starbuck instead bargains with the Borays. Starbuck's bargain leaves Nogow the constable, Serenity free of attacks, and Siress Belloby free (TOS: "The Magnificent Warriors").

Damage to his Viper forces Starbuck to force down on the marsh planet of Attila. Starbuck ends up helping some children defeat a Cylon garrison to free their father. Starbuck manages to find time to flirt with the eldest daughter, as well as teach them on how to time an attack by signing verses, as taught by his old flight instructor (TOS: "The Young Lords").

Apollo and Starbuck discover Pegasus while out on patrol. Starbuck feels threatened by Commander Cain's past ties with Cassiopeia (TOS: "The Living Legend, Part I"). Starbuck joins the commando mission that parachutes down onto Gamoray. He manages to make a pass at Sheba while preparing for the drop. He and Boomer destroy the command center for the planetary defense systems. Later he and Apollo break off of their assigned escort duty to help Pegasus by disabling some of the weapons of the basestars. They witness the destruction of the basestars, but are unsure of the fate of Pegasus (TOS: "The Living Legend, Part II").

On Viper patrol, Starbuck tries but fails to intercept all of a group of suicidal Raiders. The impact of the Raiders causes a fire aboard Galactica. Starbuck goes on a spacewalk with Apollo, helping to set charges on Galactica. Starbuck saves Apollo as the charges detonate, and the vacuum extinguishes the fire (TOS: "Fire in Space").

Starbuck is among those who first encounter Count Iblis (TOS: "War of the Gods, Part I") and when Iblis kills Apollo. He transports his body back towards Galactica. The shuttle is intercepted by the Beings of Light, and Starbuck has a chance to interact with them. Apollo is resurrected, and they return to Galactica with directions towards Earth (TOS: "War of the Gods, Part II"). 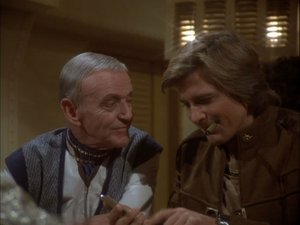 Starbuck meets his father, Chameleon, while gambling aboard Rising Star. Starbuck ends up saving his father from the Borellian Nomen that are pursuing him. Chameleon asks Cassiopeia not to reveal the results of the tests confirming him as Starbuck's father, allowing Starbuck to believe that he is not his father (TOS: "The Man with Nine Lives").

After being framed for the murder of a rival Triad player. Apollo and Boomer help prove Starbuck's innocence, implicating the actual murderer (TOS: "Murder on the Rising Star").

On the expedition to Paradeen, Starbuck helps Sarah Fowler and Michael reach their destination. Starbuck ends up lost in the catacombs of Paradeen city. After he is rescued he helps to overpower and capture the Eastern Alliance soldiers that had captured Sarah (TOS: "Greetings from Earth").

Starbuck helps Apollo with the situation on Terra. Starbuck's warning to Galactica allows her to intercept the Eastern Alliance missiles, preventing the destruction of the Nationalists and countless millions of lives (TOS: "Experiment in Terra").

An old love interest prompts Starbuck to make a trip to the Celestra. As luck would have it, part of the crew mutinies while he is onboard, including his old flame. He joins the shuttle mission to transport the mutineers to Galactica when their shuttle is nearly cut off from the fleet. After the mutineers locate the Celestra, Starbuck and company retake the ship and capture the guilty party. Starbuck returns to Galactica and patches things back up with Cassiopeia (TOS: "Take the Celestra").

Despite Cassiopeia's misgivings, Starbuck helps Apollo fly Baltar's Raider onto a basestar. After successfully infiltrating the basestar they manage to disable the ship's sensors, and escape. Their sabotage allows Galactica to get the drop on the basestar and destroy it (TOS: "The Hand of God").