Book of the Word 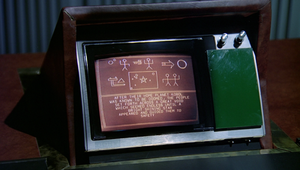 Adama reading the Book of the Word (TOS: "Lost Planet of the Gods, Part I").

The Book of the Word is a religious text of the Kobollian Faith.

It contains information regarding the exodus of humanity from the motherworld of Humanity, Kobol, and stories regarding humanity upon that planet.

Adama finds it to be useful in his search for the lost Thirteenth Tribe and Earth. It aids the finding of Kobol, as it tells of an endless magnetic void and a lone star (TOS: "Lost Planet of the Gods, Part II"):

After their home planet Kobol was known to be doomed, the people set forth across a great void which seemed endless until a bright shining star appeared as if from nowhere and guided them to safety.

According to Apollo, some of the elders of Kobol were married to "some very young wives". This fact came up when Starbuck was flummoxed over why Cassiopeia and Commander Cain had a romantic relationship (TOS: "The Living Legend, Part I").

In addition to it being the most sacred of the Books of the Lords of Kobol, its sources comprise of three thousand yahren of traditions passed down via oration; the written version is said to have been written long before the exodus from Kobol. In terms of style, the book has "stylistic unity of surpassing beauty, and its lofty moral precepts continue to speak with authority down to the present day."
Like any self-respecting book, it opens with a "mythic tale of the creation of the Universe (sic), demonstrating the remarkable insight of the ancient humans in an age before interstellar travel," with undertones that the universe's nature was benign. The book speaks of there being a multitude of many intelligent life-forms among the stars, in addition to the "physical harmony of the motions of the motions of the planets and the stars was to be reflected in harmony among men." When that was achieved, the book encouraged harmony amongst other species outside their own.
The book depicts the central theme of "The War between Good and Evil," with "simple stories dramatiz[ing] the central ethical conflicts of life in terms even the youngest child can understand." However, the tales within "have hidden complexities that have intrigued, delighted and guided even the most profound ethicists of humankind."
The book speaks of visitations by the Beings of Light (though they are not named as such), during which they guided and provided humanity with the beginnings of science and the "Word of God, immutable laws for living a righteous life." The book also spoke of Count Iblis, who went by the names of Diaboles and Mephistopheles, who attempted to lead humanity astray, although thwarted by the Beings of Light.[1]