Flight Sergeant Jolly can be best described as a hefty, jovial, likable fellow; in addition to being a quite competent Viper pilot who serves on Galactica.

Jolly is involved in the discovery of the pluton poisoning of the foodstuffs they had gotten from the Colonies before making way. He is also part of the landram expedition that helps to discover the tylium deposits on Carillon after passing through the Straits of Madagon. He, Serina, and Apollo are subsequently captured and brought to Lotay, Queen of the Ovions.

One of the many warriors that are unable to attend the ceremonies, the Flight Sergeant instead stays alert since Adama expects the Cylons to attack. When they do, Jolly comes riding in atop of a landram and drives off the Cylon onslaught as the Colonials flee the Ovions glorified farm. He comments later that Adama had expected the attack and had uniforms of the pilots distributed to anyone he could find -- civilians, techs, and cooks -- and quips, "You should see the one who got my uniform!" (TOS: "Saga of a Star World")

Lieutenant Boomer often flies as Jolly's wingman, and together they discover a Cylon outpost on an asteroid. They manage to escape relatively undetected, but contract a life-threatening disease. Bypassing normal quarantine procedure in order to make it to Apollo's bachelor party, Boomer and Jolly infect a majority of the Viper corps, save Apollo and Starbuck who are delayed from returning after encountering the void (TOS: "Lost Planet of the Gods, Part I").

Thanks to the efforts of the female shuttle pilots that had been trained to become Blue Squadron in the absence of the ailing warriors, Dr. Salik is able to discover a cure. Jolly and the other pilots are barely able to walk when they first recover, but they climb into their Vipers to join the battle over Kobol (TOS: "Lost Planet of the Gods, Part II"). 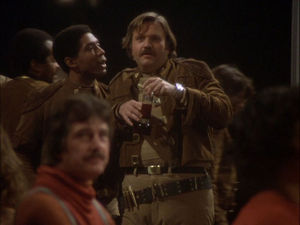 Jolly is transfixed by the dancers aboard Rising Star (TOS: "The Man with Nine Lives").

During a Cylon raid, Jolly is one of two Viper pilots who figures out the Cylon agenda to attack and destroy the agro ships. He manages to save the day by protecting the last remaining agro ship (Agro Ship 9), but can not save the crops aboard. He accompanies Adama, Apollo, Starbuck, Boomer, Boxey and Siress Belloby to Sectar on their mission to trade for agricultural seed, but stays behind on the shuttle (TOS: "The Magnificent Warriors").

While flying a patrol with Red Squadron Jolly is amongst the pilots that are abducted by the colossal Ship of Lights. Of course, after Iblis is cast out due to the Count's killing of Apollo, Jolly is returned along with Boomer, Bojay, and the other taken Viper pilots (War of the Gods).

Boomer and Jolly make their way to Rising Star when Adama grants the warriors furlon. Jolly seems content to settle in and watch the dancers for the duration, but is interupted when a Borellian Nomen activates a laser bola, inciting panic. Boomer disarms the Nomen, and manages to resolve the situation without conflict. Jolly is later left aboard Rising Star to ensure that the two remaining Nomen leave on the next shuttle after their younger companion is taken into custody (TOS: "The Man with Nine Lives").

Jolly assists Starbuck, Apollo, Salik and Cassiopeia sneak Terrans Michael and Sarah back on Lunar Avion that Michael appropriates, and helps keep up the façade that they are transferring the children off of the ship. Prior to this, he refers to them, almost humorously, as "Earthlings". When their deception is revealed by Reese, Boomer quips to Jolly: "Jolly! You forgot the kids!" This scene gives the Lunar Avion the opportunity to leave Galactica's bays and for Apollo and Starbuck to "pursue" (TOS: "Greetings from Earth").