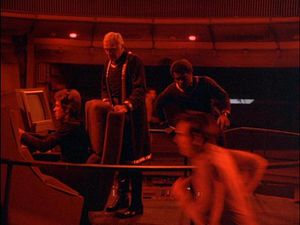 The barriers around the viewing screen are nearly closed after the "Positive shields" order (TOS: "Saga of a Star World").

Defensive shields are physical protective barriers that enclose around the viewing screen and possibly the exterior of Core command on a battlestar.

Commander Adama orders activation of these shields as they fight off the first waves of a Cylon Raider attack on Galactica and her sister battlestars in the opening salvos of the ill-fated Battle of Cimtar (TOS: "Saga of a Star World"). Adama's commands to activate and deactivate the shield are "Positive shields" and "Negative shields", respectively.

Commander Cain also has the shields activated once the basestars begin hitting Pegasus during the Battle of Gamoray. He simply orders "shield", which corresponds to the button that activates the barriers (TOS: "The Living Legend, Part II"). 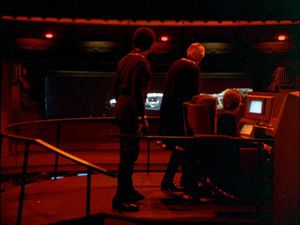 The viewing screen is opens after the "Negative shields" order, allowing the members of Core command to see Atlantia as she is destroyed.

When dealing with the nuclear missiles launched by the Eastern Alliance meant to destroy the Nationalists and Terra itself, Adama issues an order to "stand by force shields" (TOS: "Experiment in Terra").

Battlestars have "a powerful radiation field" that is capable of "deflect[ing] most laser attacks", in addition to heavy armor plating that can dampen the explosive nature of impacted warheads.[1]