This article is about the Original Series raider. For other versions, see Cylon Raider.

The Raider is the primary fighter attack craft of the Cylons. Raiders are typically crewed by three centurions. Two centurions sit up front at the controls to pilot the ship, while the third centurion sits on a raised chair behind the others to command and coordinate (TOS: "The Hand of God").

It is armed with two forward-firing laser cannons and can carry bombs in bays within the wings and on racks mounted beneath the wings (TOS: "Lost Planet of the Gods, Part II"). Oval in shape, the piloted Raider has two sublight engines for propulsion. The vehicle is both space and atmosphere-capable (TOS: "The Long Patrol").

On extended missions, Raiders have been known to be accompanied by fuel tankers. This allows wings of Raiders to cross large areas of space (relatively speaking) at sublight speeds without the aid of a basestar. This tactic is normally used on sneak attack missions, allowing Raider wings to slip past enemy defenses undetected, whereas a basestar would easily be spotted by enemy scanners (TOS: "Saga of a Star World").

Despite their larger crew and greater potential for firepower, the Raider often finds itself outmatched by the Colonial Viper. This may be in part to the greater maneuverability of the Viper, and the skill of the Colonial Warriors that fly them. Apollo seems confident in his ability to defeat Raiders if they possess any fewer than 10 to 1 in numbers (TOS: "Saga of a Star World"). 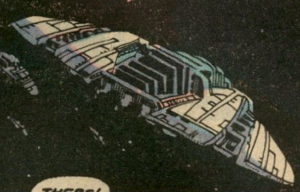 One of many Raiders pursuing Apollo and Zac, who've uncovered the numerous phalanxes of Raiders in waiting, precipitating the Battle of Cimtar (Annihilation!).

The Raider is the primary space superiority fighter of the Cylon Empire, often deployed by basestars.

These craft are prevalent and are relied on for the defense of the Fleet through the various and divergent continuities offered, starting from Marvel's comics through to the present-day Dynamite Entertainment comic book adaptations.