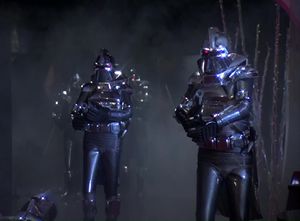 The Centurion is the workhorse of the Cylon Empire. Acting as infantry, pilots, and even cavalry (as in "The Lost Warrior") the Centurion is as versatile as it is shiny. Used in any front-line encounter, Centurions are the only type of Cylon a Colonial Warrior is likely to ever directly encounter (TOS: "Saga of a Star World").

Centurions speak with a mechanical voice, typically responding to orders with the iconic phrase "By your command". Despite their name, they are the Cylons' lowest ranking soldiers, answerable to Command Centurions and the IL-series models.

Centurions are constructed using highly advanced robotics, beyond the capabilities of the Colonials to understand easily. As part of a ruse Dr. Wilker attempts to reconstruct and reprogram a Centurion. The reprogrammed Centurion manages to move stiffly, but lacks the dexterity of a fully functional unit and destroys the controls of the Raider when it is instructed to fly (TOS: "Baltar's Escape").

Centurions are commonly armed with bayonet-equipped laser rifles, as well as swords for close combat and execution (TOS: "Saga of a Star World").

The inhabitants of Attila refer to Centurions as "tin cans" (TOS: "The Young Lords").

Centurions are shown to be vulnerable to microwave radiation, and are slowly being outmoded by an android variant with human-like reflexes and agility ("The Night the Cylons Landed, Part I" & "Part II").

Further, they are neither equipped with swords nor laser rifles, but with a laser pistol analogous to the Colonial's laser pistol ("The Night the Cylons Landed", "The Return of Starbuck").