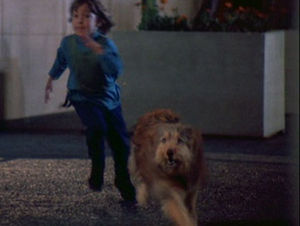 The original Muffit, a daggit, runs with Boxey on Caprica during the Cylon sneak attack (TOS: "Saga of a Star World").

A daggit is a canine-like animal used as a domesticated pet, watch animal, or tracker. No daggits survive the Cylon holocaust.

Boxey loses his daggit, Muffit, to the destruction on Caprica.

A robotic counterpart similar in appearance to a daggit, named Muffit II is built by Dr. Wilker and presented to Boxey (TOS: "Saga of a Star World").

Like a real daggit, the new Muffit proves its bravery and dedication to protecting humans during a dangerous fire aboard Galactica (TOS: "Fire in Space").

Additional mechanical daggits are briefly seen in the pilot episode of Galactica 1980.

In the re-imagined series, dogs are simply called dogs, and unlike the original series, a number of these pets (e.g. Jake) survive the holocaust within the Fleet.