The Tucana singers are entertainers who perform at the chancery at Carillon. They possess four eyes and two mouths. The lower mouth is capable of signing in a different (and substantially lower) pitch than the upper mouth.

Starbuck attempts to become their agent, somehow believing that he'd be able to get them on the "star circuit," but the singer he talks to appears uncomfortable even discussing such a proposal, looking off to the side where an Ovion is watching. She advises Starbuck to try again later, if he is still around. This implies that the singers may have been aware of the true nature of the chancery and expected Starbuck to be processed into food before too long (TOS: "Saga of a Star World").

Their fate after the Battle of Carillon remains unknown. 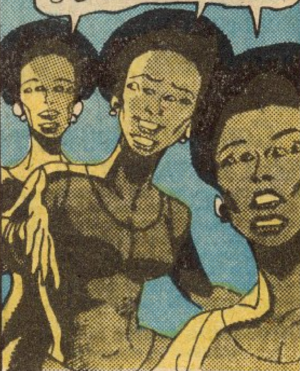 The sisters appear on Carillon as singers at the chancery, where Starbuck tells Boomer his fanciful dream of putting them up on the "star circuit," much to Boomer's bemused disdain (Deathtrap!).