For the pilot with the same callsign, see: Terra (pilot). 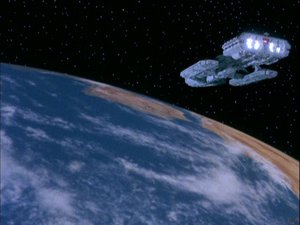 Galactica in orbit of Terra.

Colonists from Terra founded the Lunar Colonies. Galactica first encounters "Earthlings" when they discover a ship from the Lunar Colonies. The people aboard were attempting to flee the influence of the Eastern Alliance by traveling to Paradeen (TOS: "Greetings from Earth").

The Link to Earth

In the episodes "Greetings from Earth" and "Experiment in Terra" there are clues pointing to the people of Terra being descendants of the Thirteenth Tribe: