This article discusses the Original Series battlestar. For other meanings of Galactica, see Galactica (disambiguation).

Galactica is one of a handful of combination warship/fighter carriers, known as battlestars, of the Twelve Colonies of Man. Its task is to defend the Colonies' citizens from the Cylon Empire. Galactica represented the Colonial planet of Caprica.

Galactica was first brought into service approximately mid-way during the Thousand Yahren War with the Cylons. Galactica served with distinction throughout the conflict.

Galactica and her sister ships combined the roles of battle cruiser and fighter carrier, having a massive offensive capability in terms of on-board weapons and Starhound Viper space superiority fighters.

As of "Saga of a Star World," Galactica is one of only five battlestars believed to have survived the long war, and was under the leadership of Commander Adama, a distinguished member of the Council of Twelve.

Galactica and sister battlestars before the abortive Peace Conference.

The remaining battlestars amass at Cimtar for what is believed by President Adar to be a historic peace treaty signing with the Cylons. However, with the villainous aid of one of the Council's members, Baltar, Adar ignores several apparent threats to the battlestars, leaving all of them open to a massive Cylon Raider attack. Galactica Viper pilots Apollo and Zac encounter the Raider fleet, and is able to warn Galactica of the ruse.

Unfortunately, Commander Adama is unable to convince Adar to launch their Viper squadrons or place the other battlestars on alert. Adama chooses to launch his squadrons against Adar's orders, feigning a battle drill, and activates the battlestar's shields to meet any attacks.

Realizing that the Raider fleet is far away from any locatable basestars to support them, and after seeing press reports of other Raider attacks on Caprica, Adama realizes that the Twelve Colonies themselves are in mortal danger from basestar attacks, and orders Galactica to speed away to Caprica. The battlestar arrives too late; a handful of humans survive the genocidal onslaught.

The battlestar fleet, including Adar's flagship, Atlantia, is destroyed, save Galactica, the sole surviving battlestar from the attack. Adama sends out word to all the survivors to take whatever space going vessel they can find and rendezvous with Galactica. Together, Galactica and 220 other Colonial ships leave Colonial space in search of Earth, the mythic home of the Thirteenth Tribe.

While initially believed to be the only battlestar to survive the Destruction of the Twelve Colonies, the battlestar Pegasus is found, but soon disappears in a pyrrhic mission (TOS: "The Living Legend, Part II"). 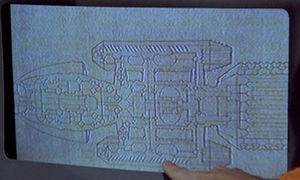 An internal schematic of Galactica (TOS: "Fire in Space").

During the course of the series, many parts of Galactica are shown.

The ship is divided in to decks and sections designated with Greek letters. During "Fire in Space" the fire is initially out of control on alpha deck, in beta and gamma sections. Dialogue indicates that solium storage is located in or near gamma section. Sections are divided into compartments, with as many as 43 compartments in a section. A series of ducts run throughout the ship. These ducts are too small for humans to fit through, but large enough for Muffit (TOS: "Fire in Space").