For the character with a similar name, see: Borellus. 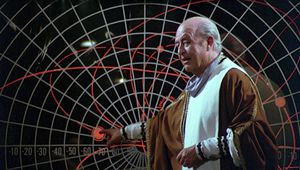 Sire Uri points to a representation of Borallus on a map during his presentation to the Quorum of Twelve (TOS: "Saga of a Star World").

Borallus is a Colonial outpost.

When considering the Fleet's next stop, after their exodus from the Twelve Colonies, Sire Uri proposes that Borallus should be their place of resupply. According to Uri, whose argument is that Carillon is too far away, "everything we need is there".

Unfortunately, being a logical place to resupply, Adama states that a Cylon task force would undoubtedly be waiting for them there (TOS: "Saga of a Star World").

Borallus is a destination Sire Uri proposes before the newly-reformed Council of Twelve after the severity of the food shortage issues become public.

Commander Adama rightly believes Borallus to be in Cylon hands and proposes the world of Carillon as their resupply destination, and is aided by his son, Captain Apollo, who claims an alternate route can be had via the Nova of Madagon (Exodus!).

The Imperious Leader, notified by the Ovions and their centurion overseer, dispatches the supreme star force that laid in wait at Borallus with the intent on destroying the rag-tag, fugitive fleet (Deathtrap!).

Borallus was one of the first worlds settled by the Colonials after their rediscovery of space travel. Borallus became a major agricultural source for the Colonies, exporting to the ever-growing Colonies and their population. From its agricultural roots, Borallus became a major space-port; thus becoming a prize for the Cylons, who took the planet to be the "home of the Cylon Supreme Star Force".[1]