This page discusses the Original Series character who intentionally betrays the Twelve Colonies of Man. For information on the unwitting betrayer of humanity in the Re-imagined Series, see Gaius Baltar. See also Baltar (TOS alternate)

Lord Baltar (sometimes referred to as Count Baltar) has a relatively prolific life as a member of the Quorum of the Twelve, the ruling body of the Colonies. He apparently financed and plotted many expeditions of the Cyrannus galaxy during the Thousand Yahren War. These surveys and expeditions also included the tylium-rich planet of Carillon, though the fact was never revealed as in reports to the Quorum. 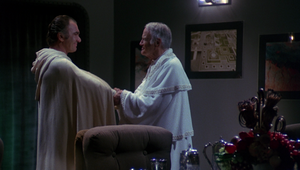 President Adar thanks Baltar for his work on the Cimtar Peace Accord (TOS: "Saga of a Star World").

For many yahren, Baltar apparently plotted to use the Cylons as his iron fist to bring down the Colonies under his dictatorship. Using the Cimtar Peace Accord as a ruse (taking advantage of both Colonials and Cylons), he manages to work up the humans' excitement for the Treaty as well as give the Cylons what they want: the eradication of the threat of the lifeform known as Man.

The Cylons take the opportunity. However, the Cylons simply consider Baltar a pawn to be used up once moved. His plans for domination destroyed, Baltar is thanked by the Imperious Leader by scheduling him for public execution. Baltar is likely sent to the planet Cylon, or one of their many outposts (TOS: "Saga of a Star World").

The First Salvation of Baltar

The new Imperious Leader spares Baltar's disheveled life to seek the Human remnant that escapes the destruction of the Twelve Colonies of Man. Baltar is spared essentially because the Imperious Leader believed that, to find the humans, another human was needed that would think as their prey did (TOS: "Saga of a Star World", "Lost Planet of the Gods").

Now in command of a fully equipped basestar, and assigned Lucifer, a IL-series cogitator, Baltar tracks down Galactica and decides to abduct a Colonial Warrior -- Lieutenant Starbuck -- to convince the warrior that he wants peace, as well as to discover why the Vipers flew so erratically. Baltar succeeds in getting Colonial survivors to believe him, Baltar continues his charade of good will by landing on Kobol to prove his intentions of peace. Using the Quorum medallion, he manages to gain entry into the Ninth Lord of Kobol's tomb. After trying to paint Adama as a liar who spread lies of his involvement with the Cylons, Baltar proves an annoyance as he tried to rob the tomb of the Ninth Lord.

Starbuck returns to the surface to tell the newly trained Viper pilots what Baltar promises while Lucifer decides to ignore Baltar's orders and begins attacking the Fleet and Kobol. Debris falls on and traps the traitorous Lord Baltar on Kobol while the Colonials flee the Cylons once more (TOS: "Lost Planet of the Gods").

The Second Salvation of Baltar

The entrapped Baltar on Kobol is once again saved by the Cylons so that they could, yet again, attempt to stop Adama's rag-tag fugitive fleet and the last battlestar.

Baltar manages to track the Fleet from the Cyrannus galaxy -- home of the Cylons and Colonials -- and to the sector containing the prison colony Proteus. Baltar apparently loses sight of the Fleet for a time after it changed course due to Robber's transmissions back to Cylon hands (mistakenly thinking he was contacting the Aeries colony) (TOS: "The Long Patrol").

Baltar plans to herd Galactica and her Fleet to Arcta and its Ravashol Pulsar to finish off Adama's fleet once and for all. Baltar's subordinate, Command Centurion Vulpa, commands the Arcta base. However Baltar's plan is thwarted and the Fleet manages to pass the planet relatively unscathed, leaving Baltar to find some way to explain this military blunder to the Imperious Leader (TOS: "The Gun on Ice Planet Zero").

Baltar manages to get in another attack by destroying the Fleet's two agro ships, and the destruction of the crops on the third. However, the agron colony of Sectar is near the Fleet. Adama manages to solicit a trade from the ruling populous of the main Sectar city, Serenity (TOS: "The Magnificent Warriors").

Baltar attempts to capture a warrior for interrogation. After this and another tactic fails near Antilla, Baltar discovers an amusing rivalry between the two Cylon IL-series cogitators, Lucifer and Specter. But Specter gets the final laugh when the Cylon cons Baltar into believing an altered-version of the situation of Antilla. This deception helps Specter keep some dignity and ability to obtain another position without being a "has-been" (TOS: "The Young Lords").

Sometime thereafter, Baltar yet again finds an opportunity to destroy Adama and his Fleet. Once finally destroying the Fleet, Baltar hopes to make the Cylon's "outer capitol" of Gamoray his seat of power (TOS: "The Living Legend, Part I"). The timely appearance of the legendary Commander Cain spoils this opportunity and others as Cain and Adama combine forces. Baltar is almost killed in his personal Cylon Raider as the Pegasus nearly collides with the ship (TOS: "The Living Legend, Part II").

Baltar survives the engagement to aid the Imperious Leader when the main city of Gamoray is assaulted by Colonial forces (TOS: "The Living Legend, Part II"). 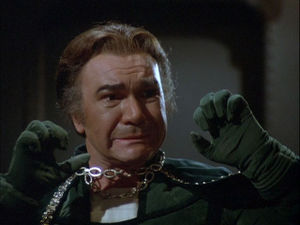 Count Baltar is forced to his knees by Count Iblis (TOS: "War of the Gods, Part II").

When Count Iblis manifests in the Fleet, Baltar requests to board Galactica under a flag of truce, but the Quorum of the Twelve sees this as a sign when he is apparently directed to surrender per the two conditions set out by the Quorum to test the seemingly omnipotent Iblis. Baltar is chastised and dropped into his personally reserved cell on the Prison Barge. Baltar attempts to help the Colonials unravel the mystery of the manifestations later known as Beings of Light, mythical figures that maintained the universe, working to aid others indirectly (TOS: "War of the Gods").

Baltar as an Aide

Baltar is essential in exposing an electronics expert and Ortega's murderer, Karibdis. After Apollo extradites Baltar from the Prison Barge, Baltar and Apollo thwart Karibdis from killing them both (TOS: "Murder on the Rising Star").

Apollo's deal, which guarantees Baltar's freedom from incarceration in return for his assistance in catching Karibdis, is reneged, and Baltar is returned to his imprisonment.

During the temporary "visitation" of the Eastern Alliance personnel, commanded by Commandant Leiter, Baltar plots his escape with the assistance of the Borellian Nomen (Taba, Maga and Bora) and Leiter's enforcers from Terra's Eastern Alliance. "Lead" by Baltar, the prisoners capture eleven Quorum members, Lieutenants Boomer and Sheba, and the Council Security in the bay at the time. 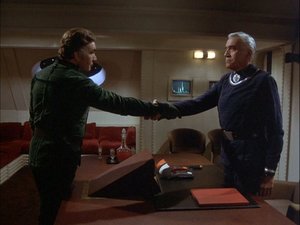 Baltar makes a deal with Adama (TOS: "The Hand of God").

Baltar gives Adama an ultimatum: return the Cylon Raider and its pilots, as well as the fueled Eastern Alliance vessel, or be responsible for the deaths of his prisoners. The prisoners are in a shuttle rigged with detonators attached to the shuttle's hull. However, Baltar is subsequently tricked into a false sense of security upon boarding his personal raider, outwitted by two dysfunctional Cylons and two warriors.

His partners in crime were more fortunate. They escape -- much to Baltar's chagrin. Baltar is left with undignified mess hall work, sputtering escape plans that do not inspire confidence from inmates (TOS: "Baltar's Escape").

The Colonials use one significant ability from Baltar: His knowledge of the Cylon's basestars. Tired of running from the Cylons, Commander Adama decides to mount an attack on a basestar discovered by a patrol. Adama believes the basestar is the only Cylon presence in the area the Fleet is traveling. In return for Baltar's aid, Adama promise adequate shelter and provisions on a habitable planet, as well as a short-range transmission device. With Baltar's instructions, Starbuck and Apollo disable the basestar's sensors, thus allowing Galactica to destroy the basestar (TOS: "The Hand of God").

Baltar's colony is given as Picon, growing up on the asteroid Cygnus where his family owned a tylium mine. At 17, Cygnus was taken by the Cylons and he lived as a prisoner for 5 yahren, all the while blaming the Capricans and Aerians for this as they had failed to adhere to their mutual protection treaty with Picon. After being liberated, he studied "political economy" at the University of Picon, later returning to turn the small mine his family had owned into "the largest intercolonial Tylium trading firm in the Galaxy (sic)" in a span of a decade.

He became bored with business and entered politics, honing his public speaking skills and offering people "what they most wanted to hear: that the Cylons could be reasonable, and that peace was at hand". His persuasive words lead to his selection to be a member of the Quorum of Twelve ten yahren prior to the end of the Thousand-Yahren War, where he began working on the armistice proposal that brought the destruction of man. At the time of the fall of the Colonies, he was 117 yahren.[1]