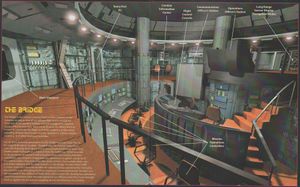 Core Command is the central nerve center of a Colonial battlestar. It is the bridge of the ship, where the ship's commander oversees operations.

Egg-shaped, narrowing toward the bow, Core Command is separated into three tiers. The upper tier is a small rotating platform. It has a command chair and a keyboard and scanner setup. It is often manned by either Adama, Tigh or Omega on Galactica. The middle tier consists of various scanners and stations, surrounding the room in a ring. People walking into core command enter at this middle level. Athena often mans a scanner at this level.

The stations of the Bridge.

Also on the middle level, immediately forward of the Command Chair, is a two-place combined helm/astrogation console with joysticks (the same design as used in the Viper cockpit, including the Turbo, IM, and Fire buttons) at both positions to steer Galactica through the three spatial dimensions.

The starboard side of the middle level has a chamber extending outward from the level's circumference, with a number of computer or communications consoles staffed by standing personnel -- these are not seated positions. The bottom tier is recessed in the middle of the room and is below the level of the forward window. There are several stations on this level. Rigel coordinates Viper launches from a station on this level.

During a battle, the commanding officer can order that the shield be activated, with the command 'positive shield': it drops down to protect the Core Command forward window from direct attack by laser fire or ramming (TOS: "The Living Legend, Part II").

The set for core command was the most expensive one used in the series, featuring over $500,000 U.S.D. worth of equipment provided by the measuring equipment manufacturer Tektronix,[1] including a large number of oscilloscopes (studio publicity handouts quoted in magazines at the time often claimed that it had cost a million dollars to construct Galactica's). According to Battlestar Galactica's PR representative, Joe Santley, the computers were run by "a central computer and cued into the actors' lines".[1]

The helm/astrogation console had some working switches which altered patterns of lights on the console: these switches were protected with wire guards similar to those used in NASA Gemini and Apollo spacecraft. Keypads not actually connected to the "central computer" mentioned immediately above were molded solid from vacuum-formed plastic and could not be depressed. The use of vacuum-formed plastic also explained the non-depressible Turbo, IM, and Fire buttons on the helm joysticks, as they were cast from the same mold as the Viper joysticks.

The set was entirely self-contained: when an actor walked into Core Command, he or she was literally walking in from a bare soundstage outside the set -- the entrances to Core Command shown in the program were the only way to enter the set, and were wide enough to accommodate a camera, cinematographer, and camera operator.

There was no glass in the forward window so as to not to reflect the studio lights. A black velvet curtain represented "space" with varying-sized disks of glass-beaded reflective material glued to it for "stars". There was a roughly three-foot distance between the window opening and the curtain, leaving room for a catwalk: occasionally one could witness through the window a uniformed Universal Studios security guard on patrol walking between the window and the "stars"!

When not filming, a small A-folded sign saying "Don't sit here!" was left on the seat of the command chair.