After Cylon Raiders ram Galactica on destructive suicide missions, the crew scrambles to fight a raging fire threatening to incinerate the ship. 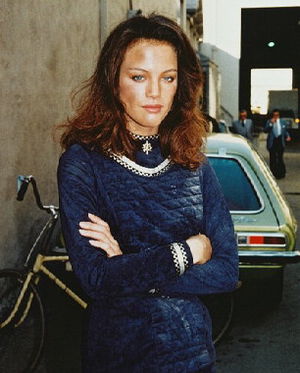 Maren Jensen during the filming of Fire In Space.

Starbuck: They're not fighting back. What are they up to?

Adama: The Vipers will be our eyes.

Boomer: It doesn't show in my file, Athena, but when I was a kid on Caprica, I hot-linked more hover-mobiles than there are doors on this ship.

Boomer: Boxey, it looks like I mashed your mushies.

Tigh: Apollo, if the fire reaches the energizer or the solium, either one... Galactica is doomed.

Adama: Let the vacuum of space smother it.

I remember with Lorne the first time we were introduced to him we were down on the "Fire in Space" set the day they were doing all the stunts and somebody said, "Have you met Lorne?" Jim [Carlson] and I said, "No." So they walked us over to him and he was very nice and tall. So, he looks at us after we're introduced and there was a lull onstage, they were resetting for something, and he says, "You don't have to give me every line, but what I do has to be imporrrrrtant." And it was this long dragged-out "impporrrrrtant." Every time we'd go down on set, which wasn't that often, and we saw Lorne sort of coming our direction, we'd get out of there. Just because we didn't want to get sucked into we're not giving him important lines.[2]

I remember all the actors and the crew were in a big semi-circle around the bridge when the big explosions would take place. They'd have stunt guys in costumes over here where the starfield was shown on the screen, and they had little tiny trampolines in place. So at a given moment, when "Action!" was called, the guys would hit those trampolines and go flying over everything and they would drop plastic stuff from the ceiling, so it looked like it was debris from the bridge. Then there would be this big round of applause from everybody, and then they would go do it again. There was also a big map on the other side of the bridge that was all wired in the back and that would shatter as well, so there were all these cool things. When they were out in the hull, that was a projection. They just had a couple of boxes on a huge empty stage and they'd have a projection in the camera of the hull. They had, I think it was Dirk [Benedict] and Richard [Hatch], wired like they'd go flying. I remember they were going out of control and just spinning, because they had to get the hang of all of that.[1]

It was when they fired the boraton towards the camera from the Vipers I thought the effect was really lame. It looked like a bad... It wasn't even smooth like a cartoon it was like somebody had put two or three slides together relatively quickly. I just thought it was sloppy.[1]

Well, first of all, we had to do two things. One of them was that we had to toss up the question the audience might have: "Why don't they just blow up what they have?" We needed to take a little bit more time so we gave that answer. The other thing is—in our heads anyway—if the gyros start tumbling, who knows what that would cause on the ship? If it just goes spinning out of control, do people go flying around? How do they get them to—"calm down" is the wrong word but you know—settle down. We just didn't even want to go into that.[1]