Serina is a survivor of the Cylon holocaust upon the Twelve Colonies.

Originally a Colonial reporter based on Caprica, Serina was present at the main hub of celebration for the pseudo-peace treaty between the Cylons and the Colonials. With her son Boxey (whose father perished in the Cylon onslaught), she became one of the mere thousands who were saved by the rescue efforts of Commander Adama and his battlestar, Galactica. She and her son were sent to Rising Star, where she furthered her relationship with Apollo. She was thankful for Apollo's efforts into making her son, who refused to eat, recover from the death of his daggit, Muffit.

With Boxey and Muffit II, a robotic daggit, she accompanied Captain Apollo and Flight Sergeant Jolly to the planet Carillon where eventually they were found and sent to the front of the Ovion's operation. Once the operation was found to be a Cylon snare, Serina and her other fellow members of the Fleet made it back to their respective ships. (TOS: "Saga of a Star World")

Leaving behind the debris of both Carillon and the old Imperious Leader, Serina began training as a shuttle pilot after Apollo announced his engagement. Although Apollo initially disagreed with that, he understood and accepted it after a heated "discussion".

As the Viper corps was all incapacitated and near death due to an unidentifiable sickness that was spread by Boomer and Jolly. She and all the shuttle pilots were suddenly being trained to fly Vipers, against the objections of Starbuck and Apollo (the two remaining active pilots). After their training, Serina and the other shuttle-turned-Viper pilots flew a novice escort of Salik's medical shuttle, and managed to ward off a Cylon fighter squadron (TOS: "Lost Planet of the Gods, Part I").

After the mission and upon entering the magnetic void previously detected by Apollo and Starbuck, Commander Adama presided over the marriage of Serina and Apollo. Unfortunately, the pilots were absent from the ceremony due to their sickness, and the Cylons had captured Starbuck. (Although Apollo was initially hesitant about going through with it because he felt so deeply for his friend Starbuck, but his mind had been changed when Serina consoled him.)

During this ceremony, a lone star was detected that would guide them forth from the magnetic sea phenomenon. They had come across the planet known as Kobol, the original place where Humanity once sprung from. Adama immediately set out to find any trace of the thirteenth colony, with Apollo and Serina at his side. Serina, along with Apollo, would have preferred to be alone on the planet, however destiny guided them toward the temple of the Ninth Lord of Kobol.

Serina bore witness to the discovery, eventually stumbling upon the tomb of the Ninth Lord, as well as the treacherous Lord Baltar. As Adama worked on deciphering the language in the hidden second chamber, the Cylons attacked and the trio fled, leaving Baltar to the falling temple. As Serina rejoined Starbuck and Deitra on the surface, two recluse Centurions mortally wounded her. She slowly died aboard Galactica. 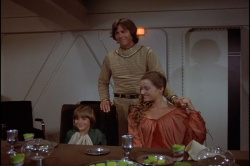 Apollo proposes he and Serina be sealed

She was rushed back to Galactica's life-sciences center, where she parted ways with the living, leaving behind friends and family, who had to suffer once more by the Cylons (TOS: "Lost Planet of the Gods, Part II").