Athena is the daughter of Adama and sister of Apollo. She serves primarily as an officer in Core Command, manning a scanner.

Athena flies Adama in a shuttle from Atlantia to Galactica. She informs her father that Galactica is on alert, as Apollo's patrol has run into trouble. After the ambush, Galactica returns to collect her fighters. Athena rushes into Starbuck's arms. Starbuck is upset that the Vipers were abandoned by Galactica during the battle, until Athena tells him that the colonies had been destroyed. Starbuck finds Athena later to apologize for how he acted in the landing bay, and points out that they may not have much time to live. Athena says that she cannot commit to a relationship in the midst of all of the chaos. Athena speaks with Adama in his quarters. He tells her about the conditions on Caprica, and it is apparent that Adama is humbled by the responsibility that has fallen to him.

While on duty in Core Command, Athena checks on Starbuck's status on the flight deck. She catches him in the arms of Cassiopeia inside one of the Launch tubes. Infuriated, she activates a steam purge of the tube, burning Starbuck (and causing great discomfort for him during his mission through the Straits of Madagon).

Athena heads down to the surface of Carillon to the chancery to spend some time with Starbuck, only to find Cassiopeia there with the same thing in mind. The rivalry between the two has officially begun.

Athena is on duty in Core Command when the Cylon attack begins. She is surprised to see how quickly the Vipers are able to launch, considering that all the pilots were supposed to be at Sire Uri's award ceremony (TOS: "Saga of a Star World"). 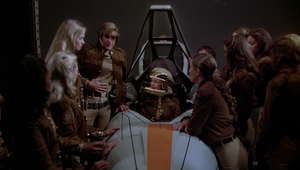 Athena in a Viper simulator (TOS: "Lost Planet of the Gods, Part I").

Athena prepares the meal at which Apollo announces his intention to be sealed to Serina. Athena gazes longingly at Starbuck, who quickly excuses himself in order to begin preparations for Apollo's bachelor party. Athena is one of the shuttle pilots selected for Viper training when the other Warriors develop the mysterious illness. During a training simulation she successfully destroys a Raider, as well as Starbuck. Athena is selected to be Starbuck's wingman during the mission to destroy the Cylon outpost, and he asks that she not shoot him this time. Athena and the other new pilots succeed in their mission, destroying the outpost and securing the medical information needed to combat the illness (TOS: "Lost Planet of the Gods, Part I").

Athena joins the group that goes down to Kobol. She is overjoyed when Starbuck returns unharmed from his Cylon captivity, and runs into his arms. When the Raiders begin their attack, Athena rushes to a Viper to go fight them. The inexperienced fighters begin to fight the Cylons, and are soon joined by the recently recovered veteran pilots. They successfully fight off the Cylon attack (TOS: "Lost Planet of the Gods, Part II").

When Starbuck is awarded a dinner reservation aboard Rising Star, Athena is disappointed that she cannot join him because she is on duty in Core Command. Adama and Colonel Tigh agree to cover her shift, and she happily leaves to join Starbuck. Meanwhile Starbuck has already made other plans, and has begun a date with Cassiopeia. Athena arrives while Cassiopeia is out of the room, and Starbuck manages to secure another private room in order to juggle the two dates. Starbuck seems to pull it off successfully, leaving each of them one of his insignia as a token of his affection. His plan falls apart when the ladies run into each other as they leave, each holding the same token. 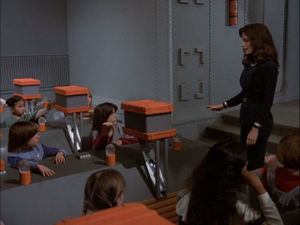 Athena teaches a classroom of students (TOS: "Greetings from Earth).

Athena puts her rivalry with Cassiopeia aside when she calls her up to Core Command. The signals they are receiving from the Recon Viper lead them to believe that Starbuck may be dead. Cassiopeia recognizes the signals as an Aerian merchant code. This is enough for Adama to call off the order to destroy the Viper, allowing Apollo and Boomer to get to the bottom of the mystery (TOS: "The Long Patrol").

Athena is playing a game with Boxey in the rejuvenation center when the suicide attack Raiders explode against Galactica cutting the area off from the rest of the ship. Athena and Boxey help tend to the wounded, and are eventually rescued thanks to the efforts of Apollo, Starbuck, and Muffit (TOS: "Fire in Space").

Athena is in charge of a classroom of students when the Terran Shuttle is brought aboard. Students in the class include Boxey and Loma (TOS: "Greetings from Earth"). Her appearance in this episode was the last time Athena would be seen in the series.

Athena was the youngest of Adama's children. She has an interest in telecommunications which lead her to pursue advance degrees in "ether physics" at the Academy. During her time there, she created various "improvements computerized (sic) in long-range scanning equipment" and also published "several widely acclaimed essays on the philosophy of science".[1]