This article is about the Rising Star as seen in the Original Series. For the Re-imagined Series version, see Rising Star (TRS).

T.S.S. Rising Star is one of the 220 civilian ships of battlestar Galactica's rag-tag fugitive fleet.

Prior to the Battle of Cimtar and subsequent fall of the Twelve Colonies, Rising Star was a luxury liner operated by Trans Stellar Spacelines (TOS: "Saga of a Star World") which traveled throughout the Colonies and various sectors in the Colonial sphere of influence (TOS: "The Long Patrol"). It is capable of both atmospheric and space flight, as well as planetary landing and unaided launch (TOS: "Murder on the Rising Star").

Rising Star consists of at least seven decks, including an "elite" level and storage facilities inaccessible by passengers (TOS: "Saga of a Star World"). Among these levels are a gambling chancery ("The Man with Nine Lives", "Murder on the Rising Star"), guest rooms (TOS: "The Long Patrol"), dining level (TOS: "The Long Patrol") and recreation level where visitors could watch Triad competitions (TOS: "Murder on the Rising Star"). She also contains a main waiting area for passengers that arrive and depart the ship (TOS: "The Man with Nine Lives") and various entertainment areas, such as open stages where dances and shows are performed (TOS: "War of the Gods, Part II", "The Man with Nine Lives"). 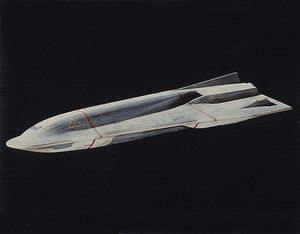 With the Thousand-Yahren War resulting in a devestating defeat for the Colonials, Rising Star became one of the 220 ships to survive the Cylons' holocaust. Under the direction of Galactica's Warriors, including Flight Sergeant Ortega, Rising Star is used to rescue any surviving women and children on Caprica. Despite these restrictions, Ortega takes bribes by at least three men for spots aboard the ship (TOS: "Murder on the Rising Star").

After the Fleet was settled, Commander Adama opens the dining level on Rising Star as a morale booster among the survivors, in the hopes of giving them an evening to look forward too. So popular is this idea that the waiting list is noted to be at least a yahren long (TOS: "The Long Patrol").