Battlestars are warships built in direct response to the generational war with the Cylons.

The first battlestars were introduced into Colonial forces around 500 yahren into the war, and proved formidable when placed against the technically-superior Cylon basestars. Many battlestars were totally destroyed during significant battles.

The eight battlestars[1] specifically mentioned in the Original Series are: 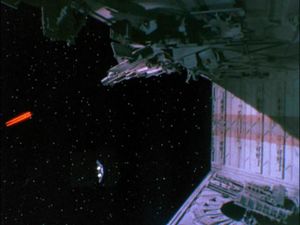 A battlestar's laser batteries fights off Raiders (TOS: "Saga of a Star World").

Within fan circles, it has generally been assumed there were twelve original battlestars, given the number of Colonies. This appeared to be supported by Encyclopedia Galactica, a non-canonical publication released in 1979.[3] However, Glen A. Larson has stated that there was never any decision to have a specific number of battlestars, nor did the Original Series state that only twelve battlestars were built. During the series' run, only eight battlestars are seen or mentioned. Given the length of the Thousand-Yahren War, it seems likely that far more than twelve of these warships were constructed.

(For contrast, in the Re-imagined Series continuity, it is stated at the start of the Miniseries that twelve battlestars were initially built during the Cylon War. However, in the years of and after the Cylon War, an additional 120 battlestars of various classes were built in that continuity. Like its Original Series counterparts, almost all of these battlestars are destroyed in an elaborate Cylon subterfuge.)

The length and beam figures given here are based on research carried out by Todd Boyce, a computer animator. There are many differing claims to the actual size of the original battlestars, ranging from some 2,000 feet[4] (the accepted length in a number of gaming systems) through to 2-3 miles in overall length.

Interviews with series creator Glen A. Larson and John Dykstra, the Visual Effects supervisor for the Original Series stated that the original Galactica was around a mile (1.6km) long. If the scale of the master model used for filming was set at 1/960, then the overall length of Galactica and her sister ships would be some 6,080ft (1,853m) - or one nautical mile. However, there is no confirmation available that 1/960 (1 inch = 80ft) was in fact the scale of the model, and the figures have thus been "back engineered" to fit the case. (It should be noted that Dykstra admitted that "[e]verything has to be exaggerated and the fill ratio of the screen has to be higher".[4])

In undertaking his work, Boyce utilised an established baseline for his calculations: the full-size mock-up of a Viper built for filming purposes. This mock-up measured some 28.5ft (9m) in length and a wingspan of some 12.5ft (4m), and formed a means by which Boyce could take key shots from various episodes, combine them with a scale model of Galactica and extrapolate a reasonably-consistent set of measurements. Thus: using film footage alone, Boyce was able to determine the length of Galactica to be some 4,143ft (1,263m), while use of a scale model produced a figure of some 4,166ft (1,270m): an acceptable difference of some 23ft (7m). What is more, these measurements appear consistent with the overall size of the Viper launch tubes (calculated at some 16ft (5m) in diameter, based on the wingspan of the full-size mock-up and images of Vipers being launched).

Given this degree of similarity in final calculations, these figures have been adopted here as the probable dimensions of the Original Series battlestars. However, in using these figures, it should be noted that:

Note: As Boyce used the mock-up Viper he made a fatal assumption of it being exactly in scale with the actual on screen SFX model. That is unfortunately not the case. The mock-up Viper is smaller and less detailed, hence, cheaper and easier to construct. The difference is (exactly) 10% resulting in a length of 10 m and a wingspan of 4.5-5 m. This brings the Battlestar to about 1400 m. As BSG was made in light of Star Wars there is the possibility that it's size was intended to be the same as a Stardestoyer (1.5 km).

Note by the researcher: The research page points out that there are proportional differences between the mock-up and the studio model of the Viper, and that the mock-up is used because it had definitive dimensions whereas the filming miniature does not. The studio model is longer in proportion, but it is not necessarily taller or wider (which a second line of research investigated). More definitive research on the matter would need to take place before any claims such as it being "10% larger" could be verified since there are many factors to consider.

Likewise, a Raider overflying a Viper, while not a truly accurate means of measurement, does in fact set the largest dimensions the Raider could possibly be and is therefore useful in the research in demonstrating how the blueprint dimensions did not correspond with the on-screen evidence, at least in that shot. The 39ft measurement is the largest it could be in that shot which is far smaller than the mock-up would indicate. It should also be pointed out that a 39ft wingspan for the raider would yield an approximately 7ft wide cockpit - a bit tight for three Cylon Centurions to fit in.

Ultimately these are not "fatal assumptions" in the research, nor can research be "thrown out" since it is impossible to determine a truly accurate measurement of the ship with multiple valid sources of conflicting evidence. The research page clearly indicates that the reader is to decide for themselves what the results mean, and that like most science fiction shows, the effects are not suited to this kind of scrutiny.

The one missing piece of information in studies like the one above is the actual diameter of the launch tube openings on the studio miniature. As someone who has spent years studying the filming model, and has designed and helped to build a very precise replica of it that is currently on display at the EMPSFM Science Fiction Museum in Seattle, Washington (see External Links section), I know these openings were 1/4 inch in diameter.

Having drawn the studio miniature in precise detail, including in 3D, I determined that a 27-28 foot Viper fits inside the tubes quite nicely if the studio model scales out to one nautical mile in length. In fact, the tubes scale out to 20 feet in diameter. Anything smaller would clip the wings of the Vipers. Don't forget there are pipes, bulkheads, and other details inside the round tubes that require clearance as well. So, I'm not quite sure how you could work it out if the ship were to be substantially smaller. Also, this value does coincide with John Dykstra's estimate that was quoted in vintage magazine articles of the period.

PS The B&W photo above should be credited to Phil Broad.

About The Filming Model

The ship model for Galactica was 6 feet in length and weighed 60 pounds. The model was built from various parts from hundreds of cannibalized plastic model kits, such as those from mini-scaled battleships, land vehicles and planes from the World War II era, to the point that "the crew had the feeling that, if it hadn't been for World War II, Galactica (the model) would not have been possible".[4]

Battlestars are constructed in planetary orbit. Battlestars have a maximum range of 500 light-yahren before refueling, although this can be affected by high-speed maneuvering and the use of weapons, which are powered by the same fuel source as the engines.

Battlestars contain eight squadrons of Vipers, in addition to being armed with "banks of turret-mounted laser cannon, strategically mounted to defend most vital areas of the ship from head-on attack" and "space-to-space torpedoes" capable of destroying larger enemy craft.

For shielding, battlestars use a "powerful radiation field" capable of deflecting most laser attacks and heavy armor plating to dampen explosive ordnance, like torpedoes or missiles. Furthermore, battlestars are split into segments that can be sealed should the hull be compromised, so the entire ship is not lost.

For propulsion, battlestars "are powered to sub-light speeds by twin solium energizers that convert matter directly into propulsive force. Tylium thrusters boost the ship past the light barrier; on full power, speeds of light times ten have been attained."

Battlestars are crewed by 500 people and consists of various facilities, "including a 100 bed life-station, a fully equipped rejuvenation center and a variable-gravity gymnasium".[5]