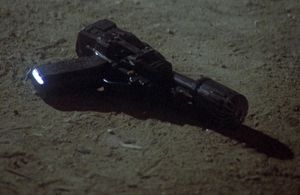 A laser pistol as used by the Colonial Warriors.

The laser pistol is the standard energy-based sidearm of Colonial Warriors.

Colonial military laser pistols contain readouts that can indicate whether or not they has been recently fired (TOS: "Murder on the Rising Star").

The energy signature in each weapon is unique, allowing tests to be conducted to prove if a particular pistol was used in a given instance (TOS: "Murder on the Rising Star").