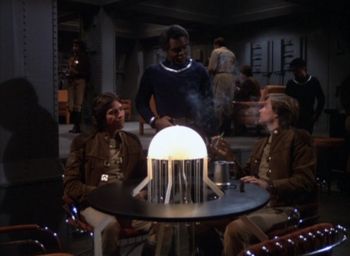 The uniforms of the Colonial military in the Original Series vary in design, purpose and distinction.

Apollo in a full Warrior's uniform.

The standard Colonial Warrior uniform consists of a beige tunic and pants. An arm patch is affixed to their right arm and there are one or two pins around the neckline. Warriors may or may not wear a brown jacket, which also has an arm patch on the right and buttons on either side of the collar. The tunic is fastened using valcron (velcro) which runs between the shoulder blade and the wearer's left breast (TOS: "Saga of a Star World"). This uniform has a dark navy blue belt with a golden buckle; a separate pistol-belt is worn, with a leg belt to keep the holster firmly affixed to the wearer's leg.

Warriors who pilot Vipers wear a pressure suit underneath their uniforms to protect them from gravitational forces (TOS: "Lost Planet of the Gods, Part I"). Apparently, this isn't so much a concern for shuttle pilots, although there is one instance of a shuttle pilot wearing the suit. [1]

Warriors also wear a helmet with a forehead adornment signifying their battlestar's crest. Galactica's crest is that of an unidentified stylized avion, while Pegasus uses a winged horse. During a Viper pilot's pre-flight sequence, the helmet activates and illuminates two sets of light bars installed at the face opening, one at the forehead and the second at the chin. The functions of the helmet are never fully specified.

Early on, Viper pilots also wore leg instrumentation, strapped to the thigh and accessible to the pilot when piloting the craft from the seated position. This appears to have been later abandoned as the duration of the exodus progressed.

There are a few variants of the Warrior uniform. The first variant, which is worn by central characters like Apollo, Starbuck and Boomer, has two buttons worn left and right on the neckline. A checkered embroidering is around both the neck and three to five inches beneath the neck. This variant also includes embroidering around the tunic's cuffs; the embroidering has a gold stripe with checkered embroidering both sides of this stripe. Unlike Cain's jacket, no other warrior jacket has this cuff embroidery.

A second variant does not have cuff embroidery. This is typically reserved for people who are not part of the main series of characters. The uniform of Commander Cain is based off the full Warrior uniform. Cain's uniform includes touches of flair in the form of embroidered cuffs, embroidered braid-like lacing around the shoulder pads, a pin on the left chest of the jacket, a neckerchief, and an gold embroidered stripe at his pant seams. His pants themselves are of the same material as the jacket and not the beige pants worn by other warriors.

The blue-colored officers uniform is similar in material and texture to the beige tunic worn by lower officers and Warriors. The uniforms are dark blue and officers of high rank, such as Colonel Tigh and Commander Adama, have two pins affixed to their collar on the left and right. They have a silver checkered band around their neck, as well as this same checkered pattern three inches from the neckline running around the upper chest and back, above that pattern is an embroidered stripe of silver. In addition, the higher-ranked personnel also have embroidered cuffs with the silver stripe and adjoining checkered patterns.

With the exception of Colonel Tolan of Pegasus (TOS: "The Living Legend, Part II"), Galactica officers wearing this uniform do not have an arm patch.

Officers of lesser rank, such as Athena and Omega, have one pin affixed to the middle of their collar.

Also, Commander Adama also wears a blue robe with the same checkered-stripe-checkered pattern running down the front on either side, this robe also has embroidered cuffs.

As seen in "The Living Legend, Part I", honor guards wear the standard beige tunic and pants, with a brown belt (thicker than the black belt worn by Warriors) and gloves with a gold trimming near the glove's gauntlet opening. Honor guards are not armed with laser pistols and have only one pin, which is attached to the center of the tunic's collar. There are also gold braids that run diagonally above the left and right breast of the tunic.

In a later episode, "War of the Gods, Part II", Baltar is flanked by Galactica's honor guards during his sentencing by the Quorum of Twelve. These honor guards differ slightly in the fact that they are armed with laser pistols and Galactica's patch is on the gauntlet of the glove. The braiding running above the breast of the tunic is also missing.

For formal ceremonies Warriors wear their a cape over their tunic. The tunic is sometimes decorated with additional ornamentation on the chest (TOS: "Take the Celestra").

While Warriors still use their typical uniforms for ground assaults, there are special occasions where Colonial strike teams need to wear different uniforms, depending on the surface conditions ("The Gun on Ice Planet Zero, Part I" and "Part II") and the type of attack (TOS: "The Living Legend, Part II"). Neither fatigues seen in the series are meant for stealth, seeing as the Cylons are incapable of shooting anyone directly or simple capture operations, unless the story permits.

In situations requiring travel in arctic conditions, members of Colonial expedition teams wear hooded parkas of a light purple color with gloves. The clothing underneath is the same as a typical Warrior uniform, sans the normal jacket. As part of this uniform, the warriors also wear breather masks and carry backpacks of different colors. Also, on search and destroy missions, members may carry a bandoleer of hand mines.

On the parka, arm patches are on both sides (as opposed to the single side on Warrior jackets) with the normal ship patch as well as a bullet-shaped color patch roughly two inches beneath. These color patches are unique to the wearer, possibly for identification purposes in inclement conditions. As with the warrior jackets, the parka is fastened with a system of six pairs of interlocking buckles (TOS: "The Gun on Ice Planet Zero, Part I").

The parka reappears in the final Galactica 1980 episode "The Return of Starbuck", and is worn during the cold nights on the planet Starbuck. It is apparently part of the survival equipment from Starbuck's Viper.

When dropping from a low-altitude orbit, Warriors wear black leather suits with matching gloves. In the case of the attack on Gamoray, the team may wield two laser pistols and strap hand mines around their midriff (TOS: "The Living Legend, Part II"), although this does not appear to be standard practice during any other land-based assault. Black helmets are worn during landing, but are later discarded after landing. 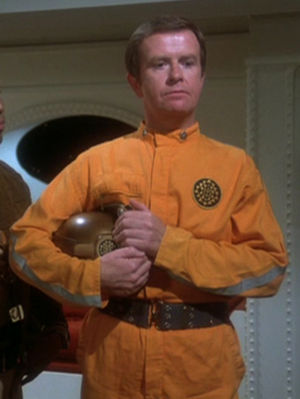 The clearest shot of the uniform to date from Galactica 1980. The only modification here are the pips at the collar.

Viper bay maintenance uniforms are orange jumpsuits with the ship's patch on the left breast. Typically, maintenance personnel wear bronze-colored helmets (with the ship's patch in the middle of the forehead), black gauntlet gloves, and plastic goggles that cover the entire eye-area of the face. They will also wear ear protection in the form of ear muffs. 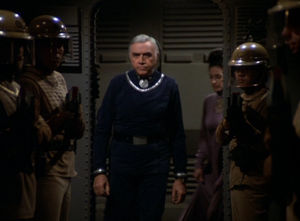 In situations where an assault is to take place, the security team will wear a riot helmet with clear face shield (in the center of which is a small seal of their battlestar) and use laser rifles (TOS: "Baltar's Escape").

Life sciences personnel wear light beige uniforms, but the tunics are not of the same material or texture as the Warrior tunic. The tunics differ from typical Warrior or officer tunics in that there is only one set of embroidering around the neck, and not beneath it. This embroidery shares the "checkered, full-stripe, checkered" pattern typically seen around the cuffs of uniform tunics.

The uniform worn by Doctor Wilker is exactly the same as the life sciences version, with the exception of the arm patch, which is the typical Galactica patch. The medical suit worn by med-techs and practitioners. Note the lack of leg covering in the female suit.

A variant of the cleanroom suit is worn by life sciences practitioners and med techs when investigating a person possibly infected with pathogens (TOS: "Lost Planet of the Gods, Part I"), as well as during surgeries (TOS: "Fire in Space").

This suit is a white, somewhat clear plastic, complete with a hood, goggles, face mask, main garment, pant, and gloves. The main garment has lower pockets for items. Curiously, females who wear this suit do not have any visible means of covering their lower body in this suit.

When in the surgical operating environment life sciences personnel wear a form of scrubs. Prior to donning this surgical attire the personnel make use of the ultrasonic scrub in order to "scrub in" (TOS: "Fire in Space").

The scrubs appear to be a light gauze wrap over the typical life science uniform, with the addition of a gauze head covering and face mask.

Firefighters wear an orange jacket (with reflective patches) to protect themselves while battling the flames. Silver helmets with an orange triangle emblem feature a clear visor. The firefighter uniform may be worn with some form of breather, although the fireleader does not make use of such a device when directing the other firefighters from the rear. Underneath the outer jacket is an orange layer of clothing with white stripes on the top of the shoulders (TOS: "Fire in Space").

In the event personnel need to operate in the vacuum of space they will don spacesuits. The outer layer of the suit appears to be comparatively lightweight. The outer layer bears Galactica patch, as well as places for schematics and diagrams to be attached to the suit. A clear helmet is worn that attaches to a backpack breathing system via two tubes. Some sort of under layer appears to be worn that covers the body of the wearer except for the face (TOS: "Fire in Space").[2] 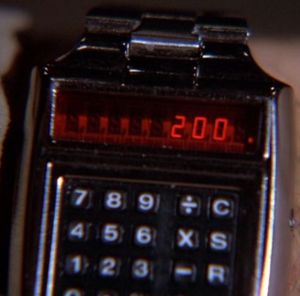 A timepiece set to 200 centons.

The wearer of a uniform may also choose to wear pieces of jewelry or functional accessories.

One such accessory is a timepiece, which apparently has three functions: to keep time like a watch, a timer feature (TOS: "The Gun on Ice Planet Zero, Part II"), and possible time or simple math calculation. The timer feature is programmed only to keep track of time in centons.