The Colonial shuttle is a large, twin-engined cargo craft. The shuttle is unarmed, but is capable of carrying a landram (or snowram) and cargo in addition to a crew compliment.

Shuttles are equipped with a loading ramp that allows for rapid deployment of the stowed vehicle (TOS: "The Gun on Ice Planet Zero, Part I"). Shuttles can also be used for deploying parachute troops, dropping out of the shuttle from a special chamber (TOS: "The Living Legend, Part II").

In the hours after the Cylon attack on the Colonies, shuttles of this type ferried survivors from ships in the new civilian fleet to Galactica for medical treatment (TOS: "Saga of a Star World").

This shuttle is also used in Galactica 1980, in particular Shuttle Alpha, a craft that ferries the Super Scouts to Earth (1980: "The Super Scouts, Part I").

While the cockpit has seating for two pilots, the rear compartment has ample room for large numbers of civilian passengers.

Shuttles are outfitted with emergency channels, which relay telemetry to their home base on the condition of the ship (TOS: "The Gun on Ice Planet Zero, Part I").

Pilots are also able to determine weight changes aboard the ship as items (or persons) are either loaded or unloaded from the craft (TOS: "Murder on the Rising Star"). 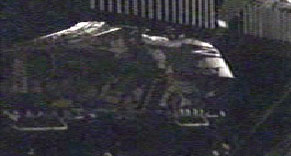 A old-era shuttle from the 2003 Miniseries.
Retrieved from "https://en.battlestarwiki.org/w/index.php?title=Colonial_shuttle&oldid=237792"
Categories: