The Colonial Viper is the primary space superiority fighter and attack craft deployed by the Colonial military. Capable of both atmospheric and long-range spacial flight, the Viper is a single-pilot craft with two-forward mounted laser-torpedo guns as standard.

The Viper is capable of rapid acceleration in the form of a "turbo boost" feature, which results in greater fuel usage (TOS: "The Living Legend, Part I"). Vipers are also able to abruptly stop forward acceleration by using their reverse thrusters and braking flaps (TOS: "Saga of a Star World").[1]

Vipers are equipped with an onboard computer which contains a warbook, an electronic reference of ships which, in conjunction with scanners, can give the pilot information on a ship (TOS: "Saga of a Star World") and identify whether or not there are life forms onboard the said ship (TOS: "The Living Legend, Part I").

In addition, Vipers' computer is capable of recording messages, which can be played back by Warriors or other persons who happen across an unoccupied Viper (TOS: "Experiment in Terra").

This Viper model is briefly seen in the Galactica Museum exhibition in the Miniseries and later in "Daybreak, Part II." 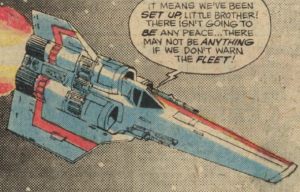 A Viper fleeing the Cylons after uncovering the numerous phalanxes of Raiders in waiting, precipitating the Battle of Cimtar (Annihilation!).

The Viper is the primary space superiority fighter of the Twelve Colonies of Man, often deployed by battlestars.

These craft are prevalent and are relied on for the defense of the Fleet through the various and divergent continuities offered, starting from Marvel's comics through to the present-day Dynamite Entertainment comic book adaptations.

Variations of the Viper include:

A variety of concepts were created by Ralph McQuarrie for the Viper, some of which ended up in Glen A. Larson and Leslie Stevens' Buck Rogers in the 25th Century.

Blueprints for the construction of the "full-size" mockups: