This article discusses the Re-imagined Series character with the pilot callsign of "Starbuck." For information on Kara Thrace's counterpart in the Original Series, see Starbuck (TOS).

Kara "Starbuck" Thrace is a gifted Viper pilot, with an attitude that has hindered her career in the Colonial Fleet. However, William Adama has confidence in Thrace's military skills, and she greatly aids the Fleet inside and out of the cockpit. She is the last Commander, Air Group (CAG) of Galactica, and mysteriously vanishes in a region that will later be known as Tanzania on the second Earth shortly after the Fleet's arrival on the planet (TRS: "Daybreak, Part II"). 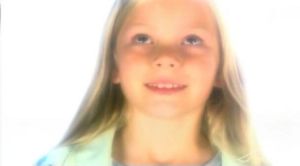 A young Kara Thrace in a vision (TRS: "Maelstrom"). 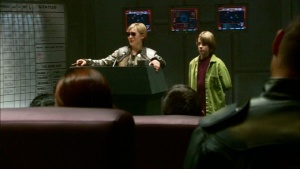 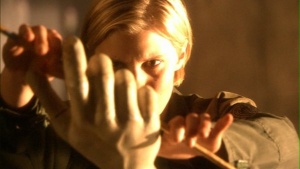 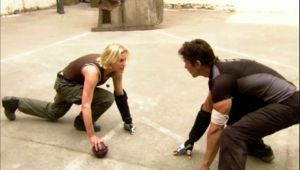 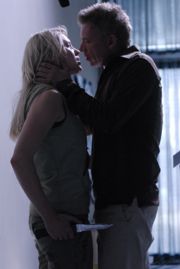 The New Caprica Ordeal and Her Death

Return from the Dead and Suspicion

The Thirteenth Colony and the Search for a New Home

Lords of Kobol, Hear My Prayer

Despite her tough, rebellious exterior, Thrace is deeply spiritual and possesses a great deal of faith in the Lords of Kobol. She usually prays in moments of mourning or desperation, such as when she thinks Lee is dead (TRS: "Miniseries"), when she is trapped on a desolate moon with a broken knee and low oxygen (TRS: "You Can't Go Home Again"), and when she discovers she's in Cylon captivity (TRS: "The Farm"). This spirituality is put to the test as a series of events lead her towards a mysterious destiny.

From early in her life, Kara Thrace has been guided through her mother's actions for a special role in life, a plot point that begins with a Leoben Conoy copy in the Season 1 episode, "Flesh and Bone". In "Maelstrom", the character dies, but reappears as a guide for the Fleet at the end of Season 3.

A Cylon Hybrid, speaking to Major Kendra Shaw moments before their deaths, warns her that Thrace is the herald of the apocalypse and the harbinger of death, that she would lead the human race to its end, and that she is not to be followed (TRS: "Razor"). Similarly, another Hybrid describes her as the harbinger of death, and she would lead them to salvation and destruction (TRS: "Faith").

This becomes the case, as she leads Galactica (and the Fleet) to a second, new planet the Colonials dub "Earth." There, both Colonials and both races of Cylon (the Kobollian-based "Final Five" and the remaining models from the "Significant Seven") are saved. However, as they blend in with the native humans on the new Earth, the distinctive natures of Colonial human and Cylon creations blur and merge. In a sense, the blurring results in the "death" of both races as a new human race begins. Hera Agathon's body, a perfect human/Cylon merging, is later represented as the Mitochondrial Eve for the humans on the New Earth (TRS: "Daybreak, Part II").