Commander Adama leads a mission to Kobol to find President Roslin and her team of tomb-hunters, reconcile with his son, and reunite the divided fleet. 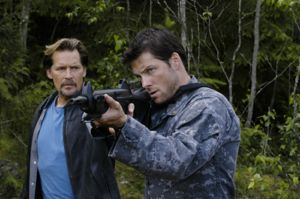 In the podcast for this program, Moore and Eick commented on their attempt to have a more colorful turn of phrase in the dialogue on the Raptor from Chief Tyrol and Adama. Tyrol's original line, in his frustration on reading a map was, "Topography's for pussies, anyway." Likewise, Adama's comment about President Adar to Bill was originally "...Adar was a prick." Both lines were changed at the behest of the studio's standards and practices unit.

Robert Falconer: One watches the series with the sense that William Adama is either an Atheist, or a man who is very private about his religious beliefs, which is interesting considering he’s part of a society whose cultural iconography seems innately tied to its religion. Has the discovery of the Tomb of Athena changed his mind about the existence of Earth, or his religious beliefs, if any?

Edward James Olmos: To answer the first part of the question, I think the beliefs Adama held were spiritual, and that he believed in the spiritual nature of humankind, but he was never a religious person, per se. He studied religions, but it wasn’t his thing, which is part of why the whole idea of Earth merely seemed like mythology or folklore to him.

As to events altering him as an individual…a lot has changed there. The biggest change Adama went through spiritually and emotionally was his own death. And when you come back from a death experience, where you’re “clinically dead” and your body stops functioning and then all of a sudden you’re brought back, at that moment you’re gone from this understanding and reality…not just lingering there, but gone.

Now nobody really knows what happens during those moments, but that disembodiment, where you’re just looking at everything going on as though watching a movie, is a profoundly altering experience by all accounts. And I think that experience has changed Adama the most.

The second life-altering experience for him was the discovery of the Tomb of Athena. One moment he’s standing in the tomb, the next he’s standing “outside” on open land for reasons not fully understood at this point.

I think those have been the most startling moments for Adama – those and discovering first-hand the new strengths and powers of the Cylons. When Sharon (Boomer) – who I loved like a member of my own family – is lying in the morgue and I ask her, “Why?”…then later I discover the other copy of Sharon on the surface of Kobol while I’m trying to reunite the family and the fleet, and she whispers in my ear, “And you ask me ‘why?’”…I realize the full implications of what we’re dealing with and I say to Lee later, “They’re much stronger than we are.”

And so all these things cause everything to change for Adama.

MB/TSFW: We had some questions come in from people that read the message board, and one of them was from Aaron Douglas. (Editor’s note: The question was actually from an earlier interview with TheSciFiWorld.net). He said that we should ask you about the names that Paul and Aaron made up for the race horses that Mary [McDonnell] took her husband to see.

Paul: I was thinking about that the other day. We had this ridiculous…Did he give you any names?

MB/TSFW: No, but he said you were all laughing so hard that you ruined take after take.

Paul: Absolutely, and once you get Mary on a roll, once you get her giggling, she will not stop. So we had a field day. We were shooting Home Pt. 2, and Mary was talking about taking her husband to the horse races and just randomly picking names. And we were talking about if you were just randomly picking names having no knowledge of the horses, what names you might choose. It would be like Lighting Steed, and Farts Dust, and choosing between the two. Or Beaten by A Nose, and A Nose for silly horse names. Three legged old man, and Guaranteed to Win. But for some reason it just struck us as incredibly silly, and we must have gone on for two or three hours, and we had hundreds of names. I think Mary laugher (sic) her way thru about 50% of those takes. [1]

Well, they barely see each other for the first half of the season. That serves to emphasis (sic) the pain invovled in the divergent paths the two men seem to be on. Lee stands over his father's comatose body on two occasions and each time feels a connection to his dad despite his apparent treacherous actions. His father's recovery he only experiences as a reported event while in exile [with Laura Roslin], and he seems doomed not to be able to put things right, and he is committed to denouncing his father's actions for the sake of democracy's cause. So when at the eventual meeting of the two men not a word is said about the past, it is so much more powerful. They now need each other on such a deep, family level that no past event can damage that. They have reached a point of acceptance of each other and each other's convictions, different as they may at times be. [2]