Cloud 9 is a massive, FTL-capable luxury liner within the Fleet. Extensively damaged during the Cylon attack, it had to be evacuated while repairs were made. Following the repairs, it is returned to full service within the Fleet, and provides a venue for the first sitting of the interim Quorum of Twelve convened by President Roslin (TRS: "Colonial Day").

The ship is unique in that as well as traditional living and working space on board, Cloud 9 incorporates a huge pressurized dome, that provides a realistic simulation of a planetary surface, including gardens, buildings, trees, and even an artificial holographic sky. Not only does the dome make this ship more luxurious, but the comfortable hotel rooms, as well as the enjoyable lounges and bars, make this ship popular and well-known to the survivors.

Cloud 9 is also unique in the fact that it is one of the few fleet ships with an asymmetrical design. The ship is split into a long, slim main section that houses the ship's landing bay, numerous hotel suites, and the sublight engines, while the massive dome is connected off the starboard side via a small connecting walkway. This design makes it impossible for Cloud 9 to attain atmospheric flight, as the forces involved would tear the ship apart. 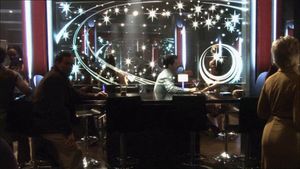 While Cloud 9 is used and enjoyed by many people just looking for an escape, the ship is also home to numerous underground "black market" activities, including prostitution, drug smuggling, and even the Cylon sympathizer/terrorist group, Demand Peace, led by Royan Jahee and Gina Inviere. Inviere is able to smuggle a nuclear device aboard (from Dr. Gaius Baltar), which shocks Jahee (TRS: "Black Market", "Epiphanies").

Later, a bar on the ship, the Starlight Lounge, is the scene of a hostage crisis in which a disgruntled Sesha Abinell, her brother-in-law Kern Vinson, hardline man Nelson Page and often nervous George Chu hold many people hostage including Captain Lee "Apollo" Adama, Petty Officer Anastasia Dualla, President's chief of staff Billy Keikeya and Galactica executive officer's wife Ellen Tigh. With the help of several gunmen, she demands that she is handed over Sharon Valerii in order to take revenge on her for an earlier Cylon attack on the Fleet which left her husband dead. She and her co-conspirators are ultimately killed when the lounge is stormed by Colonial Marines (TRS: "Sacrifice"). 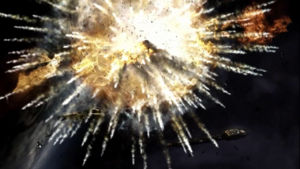 Following the jump to New Caprica, Cloud 9 falls victim to Gina Inviere, and her smuggled warhead after she deliberately sets the warhead to go off after a small countdown. The ship, and at least four others around Cloud 9's vicinity are instantly destroyed in a massive explosion. This disaster would have severe ramifications after the Cylon fleet, over a light year away, detects, and tracks the signature to the Colonial's settlement, leading to the Cylon occupation of New Caprica (TRS: "Lay Down Your Burdens, Part II").