Astral Queen is a FTL-capable former starliner in the surviving Fleet of Colonial ships. Prior to the Fall of the Twelve Colonies, the ship was converted for use as a prisoner transport vessel.

At the time of the Cylon attack, the vessel was carrying 1,500[1] male prisoners to their pardon hearings on Caprica. Astral Queen's commanding officer, Wilkens, was unsure what to do with the prisoners, and came close to abandoning them. The prisoners are spared when President Laura Roslin threatens to abandon the ship completely in response to Wilkins' threat (TRS: "Miniseries", "Bastille Day").

Following sabotage aboard the battlestar Galactica that destroys the majority of the Fleet's water reserves (TRS: "Water"), Astral Queen's prisoners are enlisted to mine ice from a planetoid to replenish the Fleet's supply. However, the prisoners, led by Tom Zarek, stage a break-out and hijacking of the ship (TRS: "Bastille Day"). The situation is resolved jointly by a Marine assault from Galactica and by Captain Lee Adama, agreeing to the core of Zarek's demands: that free and fair elections for a new president are held within the Fleet at the end of Laura Roslin's term - some seven months from the date of the revolt on Astral Queen. In return for his surrender and the assistance of the prisoners in obtaining the much-needed water ice for the Fleet, Lee Adama leaves Zarek and his men in control of Astral Queen, much to the chagrin of both President Roslin and Commander William Adama. 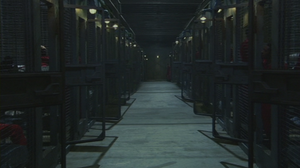 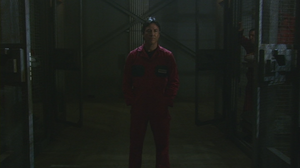 After the colonization of New Caprica, Astral Queen lands on the outskirts of New Caprica City next to Colonial One. The vessel spends several months to a year on the planet exposed to the elements, which corrodes its hull. After the Cylons arrive on New Caprica, the ship is placed behind a locked gate along with other grounded Colonial ships, and its launch key is confiscated by the occupying Cylon authority (TRS: "Lay Down Your Burdens, Part II", "Exodus, Part I").

After Galactica and Pegasus return to evacuate the fleeing civilians, Astral Queen gathers as many humans as possible before lifting off and jumping to a pre-determined rendezvous point, re-joining the Fleet (TRS: "Exodus, Part II").

The Road To Earth and Other Events

The ship is successfully guided across a vast stellar cluster, after its passengers are temporarily relocated to Galactica (TRS: "The Passage").

Several months later, when the Fleet jumps to the Ionian nebula, Astral Queen loses power and is hit by a Cylon missile in the ensuing battle, but is able to flee after the Cylons make a sudden retreat. The damage is minimal, and the vessel is eventually repaired (TRS: "Crossroads, Part II", "He That Believeth In Me").

During a thwarted mutiny attempt led by Lieutenant Felix Gaeta and Vice President Tom Zarek, the crew of Astral Queen attempt to hail Colonial One to determine why communications from Galactica have gone dark. Astral Queen joins a handful of other Fleet ships siding with the mutiny, and nearly abandons those that are still loyal to Laura Roslin and William Adama when the mutiny is put down (TRS: "The Oath").

After the mutineers are subdued, they are incarcerated on Astral Queen.[2] They are later offered their freedom in exchange for participating in the rescue of Hera Agathon during the attack on the Cylon Colony (TRS: "Daybreak, Part I").

Following the discovery of a new world to call their own, Astral Queen orbits the planet alongside Galactica as its passengers and crew permanently abandon the ship. Astral Queen and the rest of the Fleet are scuttled by Samuel Anders when he remotely pilots them into the planet's star (TRS: "Daybreak, Part II").