Baltar's trial commences, with the prosecution presenting evidence of treason committed on New Caprica amid controversial testimonies from Colonel Tigh and President Roslin. 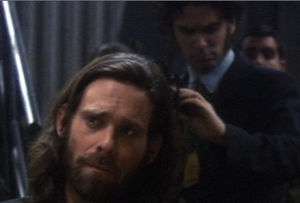 The Ionian Nebula / The Strange Music

Mark Sheppard: But I love that Romo is— I don’t know, I think he’s smarter then everybody else. (laughs) I played him like he’s smarter then everybody else. Then there is this wonderful thing that the writers created, which is that he is the protégé of Joseph Adama. But his age falls between William Adama and Lee Adama. To me it’s almost as though Joseph Adama had a second family. You know that with fathers that have a second family there’s always a younger, there’s a middle kid. So the grandson and the father, there is somebody in between them and they are in between in age as well as status. And I thought it was a fantastic thing to play. Most of my antagonism was actually played towards the Admiral, not towards Lee. The entire court room scene, looking at the shots, like whenever they bring Tigh to the stand. To bring Tigh to the stand to be a witness, to give evidence, is the most ridiculous thing I have ever seen. He has no evidence, not any at all — it’s all anecdotal. So we have a situation by which I’m not performing to the audience I’m performing to William Adama, going to Tigh: "You killed your wife and Baltar’s responsible, thank you very much now go away", but directed to William Adama: "This is your idea of justice, this is what you are doing with justice." I believe that the system is corrupt, but it’s not unsalvagable. I love the character, Col. Tigh’s character, Michael Hogan just gives the most amazing performance as his character. If I could play anybody that is who I’d want to play, as Tigh.[2]

Sheppard: Yes, [Baltar is] the easy one to punish. He’s like Daffy Duck as opposed to Bugs Bunny, he represents what we really are, as pathetic, and sad and useless as we really are (laughs) under most conditions. Most human beings are not heroes, most human beings do not behave heroically, certainly not all the time. What an incredible aspiration.[2]

Sheppard: Yeah. It was like Twelve Angry Men. The takes were nine, eleven, fourteen minutes long. Each piece we did was between nine and fourteen minutes long, and [director Michael] Rymer would put up cameras, three cameras, and we’d shoot. And we’d shoot at the same intensity and the same ferocity from the beginning to end of whatever section we were doing. We’d go as far as we could go. So Jamie [Bamber]’s penultimate scene…Apollo’s penultimate scene – his wonderful speech at the end – actually the beginning of that take is the interrogation of Gaeta. So it starts with Chelah Horsdal, “Cassidy” starting the interrogation of Gaeta, and it goes all the way through to the end with “No further questions.”

And we did it all in a day. That was a day’s worth of shooting. And it was an amazing piece to do. And I remember Rymer looking at it and going, “Hold on a second, I, uh – our chapters are only nine minutes long. How the hell are we gonna get fourteen minutes into a nine minute chapter?” That’s for the commercials. It was great.[3]

I know that last year, some of Michael Hogan's work touched me so deeply that—especially in the court scene—he had this moment where he was being pressed and he breaks, and he looks at Adama...

I talked about that for weeks...I thought about it for weeks...it just broke me. I literally was weeping when I saw that. Just that connection...he was completely mad and he had this switch, and he looked at Adama, his best friend, and he just—he admitted it—it was so horrible and so touching....but there's been so many moments like that throughout the series with so much of the cast.[4]

Notes from the podcast:

Cassidy: How do we measure loss? (pauses) How do we measure loss? We measure it in the faces of the dead. The faces that haunt our memories and our dreams. How do we measure loss? We measure it in our own faces, the ones we see in our mirror every day, because it has marked each of us. So how do we measure loss? When the scale of it becomes too hard to absorb any other way we use numbers. How many killed, how many maimed, how many missing. And when those numbers become too vast to comprehend, as they did two years ago, we had to turn it around. We began to count the living. Those of us who survived to continue the saga of the human race. (walks to a white board and begins to write down.) 44,035; the sum total of survivors from the Twelve Colonies who settled on New Caprica with President Gaius Baltar as their leader and protector. 38,838; our number the day after we escaped. And the missing number, the one no one wants to face? 5,197. 5,197 of us killed, left behind or simply disappeared. 5,197 of all that remains of the human race; lost. The citizens of the Twelve Colonies entrusted their fate and their lives to Gaius Baltar. What we received was a reign of terror that staggers our mind and breaks our hearts. Instead of guidance, we got tyranny. Instead of justice, we got oppression. Instead of a president, we got a murderer. Today humanity holds him accountable for his crime. Gauis Baltar is not a victim. Gauis Baltar chose to side with the Cylons and to actively seek the deaths of his fellow citizens. For that he must pay the ultimate price.

Romo Lampkin: Your honors, the defense would like to change our plea to guilty.
Doyle Franks: What? Counselor, are you sure you want to do that?
Lampkin: No, but what choice do I have? I mean, it's obvious my client is guilty. He's a traitor, and a killer. He's no better than the Cylon, and what do we do with them?
Audience Member: Throw them out the airlock!
Lampkin: That's right! Throw them out the airlock! This man sold us to our enemy. This man is our enemy. And if there's one thing that's good in war, that is right and just and proper, it's slaughtering our enemy! Getting some righteous payback! What are we waiting for? Let's just kill him now! (silence, then:) It'd be easier, wouldn't it? Simpler. Justice of the mob. It's what they want. Especially her. She's been wanting this for over a year now. Ever since he beat her in a free and fair election of the people. Now she gets a chance to exact her revenge upon a man whose only real crime is bowing to the inevitable. Gaius Baltar saved the lives of the people on New Caprica, where Laura Roslin would have seen us all dead, victims of a battle we had no hope in winning. I don't know about you, but I'm glad she wasn't the president when the Cylons arrived and said, "Surrender or die." I owe my life to Gaius Baltar and the decision he made that day. So does Laura Roslin.

Lee Adama: I will not serve under a man who questions my integrity.
William Adama: And won't have an officer under my command who doesn't have any.