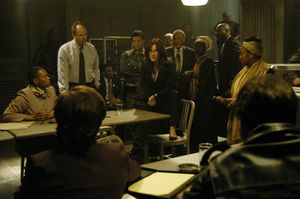 Laura Roslin addressing members of her faction on Astral Queen.

The Laura Roslin faction[1] is an ad-hoc conspiracy of Colonials who support and aid in breaking President Laura Roslin from Galactica's brig, keep her in hiding, and assist in reinstating Roslin as the effective leader of mankind. Most of the participants hide their participation in order to maintain their positions aboard Galactica, with only a few openly defying Colonel Tigh's declaration of martial law.

Actions of the faction

With tensions already high after the coup against Roslin, the final impetus break away from the Fleet occurs after the tragic death of unarmed civilians on Gideon by a group of Marines during an operation to procure needed supplies for Galactica.

Lee Adama is the key actor in freeing Roslin from the brig. He uses his status as an officer on parole to secretly plan her escape and recruits other crew members to help him along the way. After leaving Galactica in a Raptor, Roslin's getaway crew meets Tom Zarek aboard Cloud Nine, a meeting that Lee Adama arranged, figuring that Zarek's network would have the resources necessary to help Roslin. Naturally, Roslin has reservations, and for good reason — Zarek, a convicted terrorist, was arguably in on a plot to assassinate Roslin (TRS: "Colonial Day"). Nonetheless, she grudgingly concedes that "the enemy of my enemy is my friend", accepting Zarek's help (TRS: "Resistance", "Resistance").

Subsequently the faction hides away on Kimba Huta and Astral Queen from which Roslin openly addresses the Fleet, urging them to join her to jump to Kobol. Commander Adama and Colonel Tigh misjudge Roslin's drawing power, especially among the more religious population, like the Gemenese. 24 ships, consisting of 18,000 people (9,500 Gemenese, 6,250 Capricans, and 2,250 from the other ten Colonies"), break away from the Fleet and join Roslin ("The Farm", "Home, Part I").

Adama initially believes that the Fleet can survive this loss and plans to leave Roslin and her followers alone. However, Dualla convinces him to reunite the Fleet, pointing out that deep down Adama is upset that he failed in his promise to bring everyone to Earth, and that "children are separated from their parents". Adama returns to Kobol and after finding Roslin's landing party, he and Roslin bury their differences. Together, they make their way to the Tomb of Athena and find the first clue towards the position of Earth (TRS: "Home, Part I" and "II").

Among the people openly supporting Roslin are:

Conspirators whose involvement is kept secret include:

Ships of the faction

According to Dualla, 24 ships leave with Roslin. They are broken down as such: