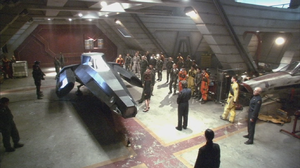 Staff and crew of the battlestar Galactica (BS 75), gather on the hangar deck to celebrate the completion of the Blackbird.

The hangar deck is where auxiliary craft, such as Vipers, Raptors, atmospheric shuttles, and even captured enemy craft are stored and maintained between ops. They are generally situated next to, or under the flight deck of the command vessel for quick access. 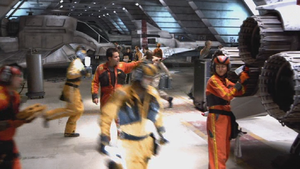 With action stations called, Vipers are moved off the hangar deck and into the launch tubes.

Hangar bays are designed to store and maintain auxiliary craft that a vessel may carry, however, not all hangar bays can accompany every possible type of small craft. Depending on the craft, Hangar decks will vary in size. On large battlestars, hangars are long and narrow, designed to hold dozens of craft, and quickly refit or refuel fighters and scouts that could be called upon to launch in a moment's notice. They feature numerous alcoves that are used as storage and work bays, and feature diagnostic, and maintenance equipment in each section that allow the deckhands (commonly called "Knuckledraggers" in military slang) to work quickly and efficiently with their assigned aircraft. Vipers stored in these alcoves can then be dragged across the slim deck and into the connected launch tubes when called upon, under the direction of the Deck Chief (TRS: "Miniseries"). 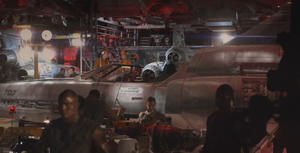 The cramped and humid hangar bay of the Osiris (0913), during the First Cylon War.

Access to the above flight deck is granted by large elevators that are located at regular intervals along the length of the flight pods. They are kept secured while in operation by airtight doors to prevent any atmospheric leaks or other kinds of serious accidents (TRS: "Miniseries). These elevators are the preferred method of launching Raptors on older battlestars, where they are lifted up to the landing bay, taxi, then "lift off" through one of the pod's fore or aft openings. Newer ships, such as the Mercury class, have specialized Raptor launch pads outside of the landing bay, that enables flight crews to launch scouts, while keeping the pods clear of superfluous traffic (TRS: "Razor").

On smaller ships, the hangar decks are much more cramped, and have no structural similarities to their larger battlestar counterparts. Conditions on these ships can be less than ideal, with smaller working spaces, high temperatures, and high humidity. However, they still feature the personnel and equipment needed to maintain a healthy fleet of fighters for fleet protection (TRS: "Blood and Chrome"). 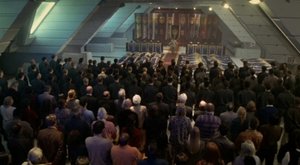 A service for the dead is performed following the renewed Cylon attacks.

After the decommissioning of the battlestar Galactica, the unused starboard hangar deck was converted into a gift shop to accompany the brand new Museum set up in the above flight deck. Following the Fall of the Colonies the starboard hangar deck was used several times as temporary housing for homeless civilians, ultimately becoming the permanent "Camp Oil Slick" following the destruction of several vessels during the evacuation from New Caprica. The occupants of many vessels were temporarily sheltered here during the crossing of the Passage (TRS: "The Passage"). Another section was set up as a bar, that became a popular R&R spot in the later years of the Colonial's exodus (TRS: "Taking a Break From All Your Worries").