For other people with the same or similar first name, see: Joe (disambiguation).

Joe's bar is a drinking establishment on Galactica. 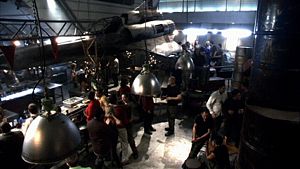 It is located behind a storage area on one of the hangar decks, probably in the largely unused starboard flight pod, and run by a civilian, for whom it is named after. Charlie Connor also works as barman there.

Lee Adama seems to be a good friend of Joe. The two might know each other from elsewhere in the Fleet, or Adama spent some time at the bar before introducing Tyrol to it.

The bar includes a pool-like table and a Pyramid arcade game for entertainment. A distiller is present to produce fresh alcohol.

A Viper Mk II is suspended from the ceiling above the bar. It is likely just an airframe that was stripped of all useful parts, like the scrapped Viper 289.

At some point, a piano was also added to the establishment. ("Deadlock"; Kara Thrace notices the piano for the first time, suggesting it's a new addition). 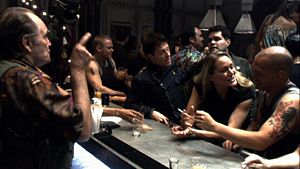