This page covers the episode titled "Resistance." For other meanings, see: Resistance.

Riots break out in the Fleet over Tigh's declaration of martial law, and a group of Galactica crewmembers led by Lee Adama smuggle Laura Roslin out of the brig and into Tom Zarek's hands. Meanwhile, Kara Thrace and Karl Agathon fall in with a group of humans who survive on Caprica and started a resistance movement. 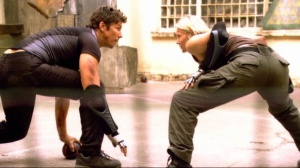 Starbuck and Anders playing a game of pyramid.

Saul Tigh: What the hell's the matter with your Cylon detector, doctor? You gave the assassin a pass.
Gaius Baltar: Yes, but that was a beta test. A preliminary. Clearly I haven't perfected my methodology and she slipped through.
Saul Tigh: So what the hell are you telling me here, that we are back to square one? That no one's results are definitive?
Gaius Baltar: No, I am-
Saul Tigh: That we have no way of knowing who are the Cylons among us?
Gaius Baltar: -not saying that, since Valerii's test- since the assassin's test I've developed a new set of protocols which should eliminate any errors - anomalies - that popped up earlier. Look, if you let me test the chief's blood, I might be able to tell once and for all if-
Saul Tigh: No "if"! I want a definitive answer, no more of your weaselly technobabble. He's a Cylon or he's not. So get down there and do something right for a change.
Gaius Baltar: I am the Vice President. Legally speaking, if the President is incapacitated, shouldn't I take over her-
Saul Tigh: Legally speaking, I have declared martial law, that makes you nobody.

Sharon Valerii: (crying) Chief? I thought you were on Kobol?
(Tyrol is shoved into the cell, and Sharon tries to hug him)
Chief Tyrol: Don't you talk to me. Don't come near me. Don't even touch me. If you do, I will kill you.

Cally: They locked the Chief up with Boomer. Tigh thinks he's a Cylon.
Gaius Baltar: I know. I'm going to see the Colonel now. If anyone's going to find a way to clear the Chief, or...
Cally: Or what? Throw him out the airlock like a piece of garbage? If Commander Adama were in charge, this would have never happened.
Gaius Baltar: Yes, but he's not in charge, is he?

Cally: I've known the Chief for years. He's no Toaster!
Baltar: He was involved with Lieutenant Valerii, who most certainly is a Toaster.
Number Six: That word is racist! I don't like it!
Cally: Sure...he's shown some bad judgment getting involved with her. But that doesn't mean he's a Toaster. You've got to help him.
Number Six: Say something, Gaius. Tell her you won't have racial epithets used in your presence!

Cally: They're putting the Chief in there, you know.
Jammer: I don't care if they put a giant parakeet in here. Colonel says build a cell, we build a cell.
Cally: This isn't right. He's one of us!
Jammer: No, he's one of them. He always was. We just never saw it.
Cally: No, he's innocent! She tricked him!
Jammer: Wow, such loyalty. Were you fracking him too? (Cally slams Jammer into a wall, then punches him in the face. Hard) You want to get pissed at someone, you get pissed at Boomer! She's the one who put the Chief in the cell here, not us!

Lee Adama: Well, we're home free for now.
Tom Zarek: (standing in the hangar bay) Good to see you, Madam President.
Laura Roslin: Captain Apollo, what is Mr. Zarek doing here?
Lee Adama: Once Tigh gets over his initial shock, he'll send troops out to search for us, and if we're going to make it, we have to keep on the move. I figured Mr. Zarek here is the only one in the fleet with enough shady friends around to hide us.
Tom Zarek: (to Laura) I love the way he puts that.
Laura Roslin: Well, Mr. Zarek, it would seem that the enemy of my enemy is my friend.
Tom Zarek: Call me Tom.

Sharon Valerii: I love you, Chief...