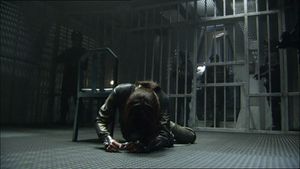 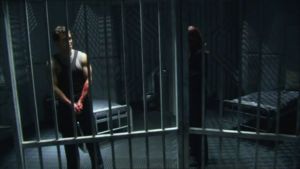 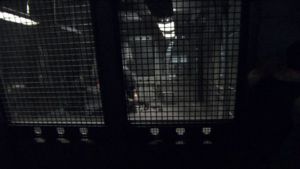 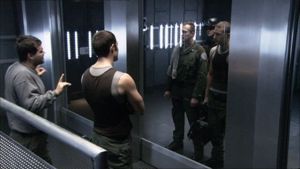 A brig is a compartment that serves as detention space aboard a ship. Persons confined to the brig are informally said to be "in hack" (TRS: Miniseries, "The Captain's Hand").

Galactica has several brigs. One has at least two small cells with bunks and a desk to the outside the observe the prisoners and handle visitors. The other brig has one larger cell with no commodities for high-security prisoners. There is usually a Marine guard standing watch inside the room. In the high-security brig, there are usually around four.

After Sharon Valerii is revealed as a Cylon, Colonel Tigh orders the construction of a third reinforced brig, built for the specific purpose of containing captured humanoid Cylons, who possess strength far greater than a human, for an extended period (TRS: "Resistance"). The new Cylon brig is constructed with maximum security in mind; instead of having simple bars, its walls consist of metal grid screens welded tightly together, reinforced by composite plastics and a telephone is used to communicate between the inside and outside of the cell.

After being brought to Galactica, Caprica-Valerii is detained within the new Cylon brig. She spends over a year in this cell, but after Admiral Adama strikes a friendship with her, he allows her to decorate it almost like real quarters, with tables, chairs, a couch and other amenities (TRS: "Occupation").

Pegasus has a more advanced brig than Galactica, with composite plastic walls instead of metal bars, and computer ID recognition cards required for entry ("Pegasus", "Resurrection Ship, Part I").

Notable characters who have spent time in the brig are: