The nature of Kara "Starbuck" Thrace's specific destiny began in the Season 1 episode, "Flesh and Bone", continues through "Maelstrom", where the character dies, and continues with theological ramifications in the season 3 cliffhanger, "Crossroads, Part II". Indications from the series' events strongly suggest that Thrace has an unknown connection to one or more locales or entities: The Temple of Five, the Cylons' Final Five, the Thirteenth Tribe and the The Lords of Kobol.

Thrace is told of her part in a destiny by the second copy of the Cylon Leoben Conoy in the season 1 episode "Flesh and Bone" during his interrogation. The lines suggest that Thrace's destiny also involves the Leoben himself:

"This is not your path, Starbuck. You have a different destiny."

"All this has happened before, and all of it will happen again."

"You kneel before idols and ask for guidance and you can't see that your destiny's already been written. Each of us plays a role, each time a different role. Maybe the last time I was the interrogator, and you were the prisoner. The players change, the story remains the same. And this time...this time, your role is to deliver my soul unto God. Do it for me. It's your destiny, and mine."

In this same dialogue, the Leoben talks of the abuse that Thrace suffered at the hands of her mother, Socrata Thrace.

The Eye of Jupiter 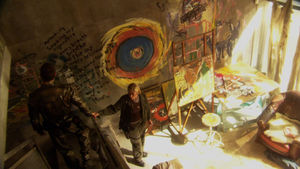 Fewer elements are noted about the destiny in season 2. In the episode "Valley of Darkness", Helo and Thrace enter Thrace's old apartment, where, among other paintings, a noticeable "bullseye"-like painting is seen. Several episodes later, in "The Farm", the Cylon later to be known as Sharon Agathon tells Thrace after her rescue from the Farm: "They know who you are, Kara. You’re special. Leoben told you that. You have a destiny." A Simon also reflects knowledge of Thrace's abuse as a child through a medical examination in the same episode. 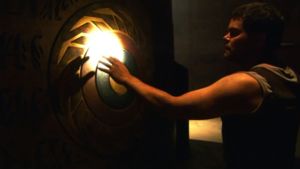 By late into season 3, the episodes "The Eye of Jupiter" and "Rapture" reveal the Eye of Jupiter, a symbol left by the Thirteenth Tribe in the Temple of Five. As the home star of the Algae planet goes nova, the star's discharge is very similar to one that was observed in the distant Ionian system at the time of the Thirteenth Tribe's journey, and greatly resembles the symbol of the Eye in the temple. Only Helo had seen what is now called the "mandala" by the Fleet leadership before, and shows Thrace the photo of one mandala from the Temple of Five, comparing it to Thrace's symbol. Thrace remembers the words of the Leoben from "Flesh and Bone."

By "Maelstrom", Thrace is seeing the mandala in many objects: the dripping of wax, and as the colors of a gas giant's planetary storm. Thrace becomes increasing distracted by and attracted to the symbol whenever it appears. When she is knocked unconscious during her last flight and "awakens" in her old apartment (where the mandala appears again), a person in Leoben's likeness greets Thrace and allows her to relive the last moments with her mother. This section vaguely alludes to information that Socrata knew about her daughter's path in life and tried to prepare her for it as best she knew how. The podcast for the episode by Ron D. Moore supports this by stating:

[. . .]"(In) this episode, you could see that there was really something behind it. That Kara really does have a destiny. That Kara really was fated for a particular end. And that mom was trying to prepare her for that. And prepare her for those roles, on some level, even if she couldn't quite articulate why and what she was doing to her daughter, that her mother believed and had seen oracles and had felt that Kara was special, and that out of her desire to toughen her daughter and make her daughter strong enough to take on the challenges that she was gonna face one day, she had really stepped over the line and had abused the daughter and had created this really toxic relationship between mother and child."

Socrata Thrace's use of Oracles strongly support the connection between Thrace and the Lords of Kobol.

When Thrace visits the oracle Yolanda Brenn, the pilot finds a figurine of Aurora, ostensibly a figure of worship in the Colonial faith, if not a Lord of Kobol itself. The oracle tells Thrace to keep the figure until Thrace realizes who should receive it. That person is Admiral Adama. After Thrace's death, Adama places the Aurora figurine on his sailing ship model as a figurehead. The figurehead on a ship given by Thrace may allude to a connection to the path to Earth through Thrace and her destiny, but little more can be determined by this aired information.

The most mysterious element towards the end of the episode involves the revelation by Thrace that the Leoben in her vision is not in fact Leoben (nor does it claim to be). What or who the vision was that guided Thrace in the vision is unknown, but "Leoben's" presence with Thrace in her last moments before choosing to die reflects the "Flesh and Bone" line from an actual Leoben: "You have to deliver my soul unto God. Do it for me. It's your destiny, and mine." The "Leoben" claims to guide Thrace to what lies "between life and death". Thrace then reawakens in her cockpit, and finds herself rapidly losing altitude, endangering her Viper. After briefly saying goodbye to Lee Adama, she intentionally lets her Viper drop below the critical altitude. Thrace sees a vision in a white light (viewers also see Thrace as a young girl) after which her Viper explodes.

In the Season 3 finale, Kara Thrace's destiny as a possible avatar of Aurora appears to gain support when she reappears in a pristine Viper Mark II, flying alongside and speaking with Lee Adama. The fact that Apollo spots Thrace's Viper on his DRADIS suggests that it is a physical object, not a hallucination or other vision. The method of Kara Thrace's resurrection is unclear. The podcast for this episode confirms that Thrace did die, and has returned— something that, prior to this episode, only a Humanoid Cylon could do. The resurrected Thrace is not a Messenger [1].

The Warning from the First Hybrid

In the ending of "Razor", during the raid on the Cylon basestar, the Cylon Hybrid tells Kendra Shaw that "all of this has happened before and will happen again" and that Kara Thrace "will lead the human race to its end. She is the herald of the apocalypse. The harbinger of death. They must not follow her." Despite being unable to fully understand the importance of the Hybrid's warning, Shaw tries to warn Commander Lee Adama aboard Pegasus, but Cylon jamming prevents Adama from receiving the full message.

Return of Leoben Conoy and the message from the Hybrid

While leading the Demetrius on a mission to find Earth, Starbuck flies a CAP herself with Hot Dog as her wingman. While in space they encounter a severely damaged Heavy Raider piloted by the Number Two copy that held her captive on New Caprica and is likely the same one from the Gemenon Traveler. Thrace takes him prisoner and he tries to convince her to jump to his basestar to meet with the Hybrid and form a truce between the rebel Cylons and the Colonials. She ultimately agrees, but ends up in a power struggle for the ship that ends when Samuel Anders shoots Felix Gaeta in the leg. Thrace ends up taking a Raptor carrying herself, Leoben, Athena, Anders and Barolay to the baseship. There, Barolay is killed by a Six who is then killed by Natalie to appease the Colonials. Thrace meets with the Hybrid who leaves her with a cryptic message and who also tells her that she is the harbinger of death and will lead the human race to its end, echoing the words of the First Hybrid to Kendra Shaw before their deaths (TRS: "Faith").

The "harbinger of death", spoken by Hybrids, may refer to Thrace's role in the chain of events which lead to the destruction of the Resurrection Hub, rendering the humanoid Cylons mortal[2].

Hybrids have historically shown to be able to sense or foretell momentous events for both Cylon and human characters[3]. Colonials have similar individuals which have had the same ability and spoken to both Colonial and Cylon: Oracles.[4]

In popular usage, the term "apocalypse" has incorrectly been used as a synonym for "armageddon", the end of the world through a great war between good and evil forces. The correct meaning of apocalypse is "revelation", defined as an uncovering or disclosure via communication from a previously hidden or unknown divine source that could not be known apart from the very moment of the source's time of unveiling itself. The babble of the Hybrid to Baltar also refers to the "five lights of the apocalypse," presumably the Final Five and/or the Five priests.

If this stricter definition of apocalypse/revelation is used, Thrace's destiny may lead to an encounter with the Lords of Kobol, the Cylon god, or another divine source -- an event that neither side may be prepared to do as of the conclusion of "Revelations", based on previous events where both Colonials and Cylons have denied the existence or divinity (and, in short, the validity) of the Lords of Kobol and/or the Cylon god.[5]

Starbuck finally fulfills her destiny in Daybreak, Part II: Lead the Fleet to a new home where human and Cylon can live in peace. She had previously learned that the song which activated four of the Final Five Cylons was in fact a song which her father had taught her when she was a child. In an attempt to make sense of the song, she tried assigning numbers to the notes and performing mathematical calculations on them, to no avail. At the conclusion of the Battle of The Colony, as the Cylon Colony and the battlestar Galactica were falling towards the event horizon of a black hole, Thrace - who happened to be nearest to the FTL console - was ordered by William Adama to jump Galactica. As she did not know the rendezvous coordinates for the Fleet, she input the numbers as a set of FTL coordinates and jumped Galactica there. The ship ended up in orbit over the moon of a habitable planet. It was on this planet, which the Colonials christened Earth, that the remnants of humans and Cylons lived, abandoning their advanced technology and living with the early human natives of this second Earth. Shortly after settlement began, Starbuck declared to Lee Adama that her journey was now over, and disappeared, apparently some kind of angel sent back from the dead to finish guiding the Fleet home.

The "Harbinger of Death" Explained

Kara does not lead the human race to its end as one would initially think. It seems that by "end" the hybrid meant not their destruction but their goal, seeing as she actually leads Humanity to a new home and saves them from extinction. However, since all of today's humans are distant descendants of Hera Agathon, the "pure" human race did in fact come to an end over the generations that followed. Furthermore, by abandoning its advanced technology and making peace with the Cylons, Colonial Humanity came to an end and started over from scratch as Earth Humanity.

Kara being the "harbinger of death" can also be explained as her having died and then being brought back to life. Thus, she is "living proof" of the notion that everything dies and that there is life after death. This is evidenced by her role in the events leading up to the destruction of the Cylon Hub.