DRADIS (Direction, RAnge, and DIStance)[1] is a series of highly sensitive detection, identification, navigation and tracking systems used to determine the range, altitude, direction, or speed of objects. It can be used to detect aircraft, spacecraft, weapons ordnance, celestial bodies, and terrain. [2] 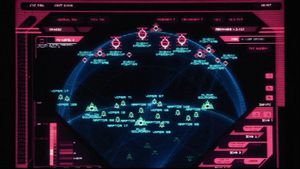 DRADIS is a central component of the navigation computer, and defensive and offensive weapons systems, especially on Colonial warships that do not have windows or portholes of any kind that would allow an outside view of the vessel. Without it, the warship is blind. It is the first line of defense after enemy contact is made, alerting warship crews to any incoming danger, such as nuclear (which triggers the ship's Radiological Alarm) (TRS: "33", "The Captain's Hand") or conventional ordnance (TRS: "He That Believeth In Me"), and any objects that might pose a collision risk ("CBDR" - Constant Bearing, Decreasing Range) (TRS: "Pegasus"). Tactical and navigation data acquired from DRADIS scans are displayed on a series of screens that form the DRADIS console, suspended above the CIC's Command and Control console (TRS: "Miniseries", et al). 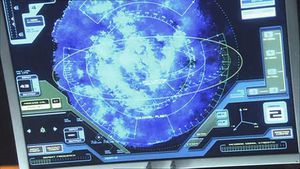 A DRADIS readout is hindered by large amounts of external interference.

DRADIS systems are often subject to various sources of interference, and clutter. These can come from excessive contacts or naturally occurring objects such as nebulas, EM interference, star clusters, pulsars, and binary stars. There isn't much an operator can do to eliminate these sources, and must do the best they can given the circumstances. However, DRADIS systems can still eliminate these sources enough to detect objects at closer ranges (TRS: "Lay Down Your Burdens, Part II"). DRADIS operators can also "turn off" various sources of clutter, for example, excessive or uninteresting contacts can be toned down to simply an icon on the screen, allowing more important contacts, such as a ship's Combat Air Patrol, or enemy contact, to be highlighted with its speed, direction, and transponder ID.

Carbon composites can also absorb and diffuse DRADIS scans, rending any vehicle comprised of such material largely invisible. One such vehicle, the Blackbird, was able to fly through and photograph a Cylon fleet tracking the battlestar Galactica without being noticed (TRS: "Flight of the Phoenix"). Conversely, false positive contacts can be induced through electronic interference or malfunction, producing contacts that either misrepresent their actual configuration or do not actually exist. In the case of the latter, such false positives are referred to as "ghosts" (TRS: "Exodus, Part II", "The Oath").

The Cylons also employ DRADIS on their spacecraft, however, in what capacity is not known. No visual representation of the Cylon DRADIS exists, as the corresponding tracking data appears to be uploaded directly into the consciousnesses of the Cylons in charge of command and control via the Baseship datastream (TRS: "The Ties That Bind").

The "Direction, RAnge, and DIStance" breakdown of the acronym "DRADIS" was listed in an early manuscript of the first half of the Miniseries. Since some major elements of this script were changed (such as Kobol being the sole home of the Colonies, and not separate worlds) in comparison to the completed teleplay, canonical use of this breakdown should be taken with some skepticism.

There is some evidence to suggest that the original breakdown is the canonical version. In "Kobol's Last Gleaming, Part I", Lt. Alex "Crashdown" Quartararo performs a DRADIS sweep of Kobol. The aerial survey is later presented to the President. For a brief moment, as Roslin takes the survey image out of Billy Keikeya's hand, the DRADIS information printed on the image is visible (Bottom right). The letters on the image are clear and are as follows:

The letters represent numerical values. While this is not conclusive evidence, it is consistent with the original manuscript definition.