Hera Agathon is the first successful Human/Cylon hybrid, the culmination of the Cylons' experiments to achieve viable procreation. Being the only known successful progeny of a humanoid Cylon; the Cylons literally consider her a "miracle from God".

Her parents are the human Karl "Helo" Agathon and the Cylon Sharon "Athena" Agathon, both officers of Galactica.

Sharon, who at the time was posing as Sharon "Boomer" Valerii, was dispatched by her comrades to take part in a Cylon experiment involving setting up Karl to fall in love with and impregnate her.

Previous and other current attempts to create hybrids; most especially the forced cross-breeding experiments in the Cylon Farms met with complete failure, thus making the experiment necessary. The Cylons theorized that the key element to procreation they were missing was true love (itself an important element to Cylons, because they believe that "God is love").

Some time after the experiment began; Karl and Sharon finally conceived their daughter in a night of passionate sex, following Karl's "rescue" of Sharon (really a deceitful test by the Cylons to test his love for Sharon; which he passed). Immediately following her success, Sharon is ordered to convince Karl to stay in "hiding" on Caprica. Unfortunately for the Cylons, however, Sharon, by this time, had really fallen in love with Karl. To this end, Sharon began helping him to escape the Cylons; her love for Karl and their unborn child eventually leading her to switch her allegiance over to the Colonials.

Kara Thrace, who arrived earlier on Caprica to retrieve the Arrow of Apollo, leaves with Caprica-Valerii and Agathon in a captured Heavy Raider. Caprica-Valerii is incarcerated in Galactica's brig for the next few months, as her pregnancy continues to advance.

Agathon is born by emergency surgery one month premature. President Laura Roslin arranges with Doctor Cottle—and without Admiral William Adama's involvement—to fake Agathon's death and secretly gives the child to a woman named Maya under the guise that the child is the daughter of a Pegasus officer. The subterfuge, Roslin presumes, is necessary to keep Agathon safe from humanoid Cylons that may be hiding in the Fleet (TRS: "Downloaded") [1]. Maya, unaware of her new child's past, names the girl Isis (TRS: "Lay Down Your Burdens, Part II"). 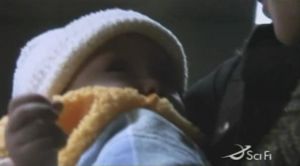 Hera Agathon as an infant, in the care of Maya.

Gaius Baltar's Messenger Six tells him he will someday raise this child, told to him in a vision he had while trapped on the planet Kobol. However, unaware of what President Roslin has done, Baltar, like the rest of the people who knew about her, believes Agathon to be dead.

When the Fleet settles on New Caprica under the rule of newly-elected President Baltar, Roslin begins teaching at a settlement elementary school with Maya. Roslin keeps Agathon and Maya close for observation in a cradle identical to the one Baltar saw in his vision.

Before the Battle of New Caprica, Roslin hides Maya and Agathon in the resistance's underground bunker. She then tasks Samuel Anders to have two of his best men protect them at all costs, and later make sure they get off the planet. (TRS: "Exodus, Part I").

Time with the Cylons

In actuality, however, during the civilian evacuation, Maya is killed and Hera left behind. Later, when it is confirmed neither escaped with the Fleet, Roslin assumes Hera died on New Caprica. In actuality, however, Hera was found and rescued by President Baltar, Caprica-Six, and Number Three, and brought aboard a baseship (TRS: "Exodus, Part II"). She remains in the care of the Cylons, who are happy to welcome her.

Later, Hera begins to fall ill, and none of the Cylon physicians (who have no pediatric experience) understand why.

Karl and Sharon finally learn of Roslin's duplicity when Adama reveals the truth (after learning it from Boomer and confronting Roslin with the knowledge). Naturally, Karl and Sharon take it hard, and immediately Sharon desires to see her. Later, she compels her extremely-reluctant husband to shoot her dead, so she can download to the Cylon ships. Later, Adama is convinced by Karl that Sharon will not be captured and forced to convey information on her mission, and when Roslin objects, Karl coldly reminds her if she hadn't lied and stolen Hera from them; the situation would never have developed, and so Roslin immediately capitulates.

Upon downloading, the sympathetic Caprica-Six brings Sharon to Hera, believing her story of how the humans wouldn't let her see her daughter and so felt it was the only way. Hera immediately recognised her mother (despite Boomer being in the same room) and Sharon tearfully reunited with her.

Sharon, through her Colonial training and maternal instinct, realizes that only Colonial medical care can save Hera Agathon, who appears to be suffering from an intestinal blockage. She persuades Caprica-Six to help her escape back to Galactica with Hera ("The Eye of Jupiter", "Rapture").

Agathon appears in several visions seen by Caprica-Six, Laura Roslin, and Sharon as the Fleet approaches the Ionian Nebula. In each vision, the three adults are compelled to save the child for motives not explained (TRS: "Crossroads, Part II").

Two months later, after returning from the Demetrius mission with a rebel Cylon basestar, Sharon discovers that Agathon has a fixation with Number Six, seeing that Hera's various crayon drawings of both the number itself and various depictions of Six, including one that looks like the Virtual Six in the red dress. Agathon then leaves after this discovery, leaving her mother to frantically search around Galactica's corridors for her. After Sharon sees Natalie with Agathon, she has Galen Tyrol take Agathon away before mortally wounding Natalie (TRS: "Guess What's Coming to Dinner?"). As a result of this action, Agathon is briefly taken away from her mother, herself incarcerated in Galactica's brig by Admiral Adama, but he reverses that decision days later (TRS: "Sine Qua Non").

Return to the Cylons, Rescue, and Destiny

Hera remains in the care of her parents, and soon it becomes apparant that she is a critical part of solving the mysteries of the Final Five's history and mankind's destiny. The Agathon family's tranquility is shattered when Boomer, having pretended to defect to the Colonials with Ellen Tigh, executed her mission to kidnap Hera and bring her to John Cavil. To this end, Boomer knocks out Sharon, seduces Karl (in full sight of a hidden and bound Sharon), who thinks she is his wife, and picks up Hera from the ship's daycare. She drugs the child and places her in a supply crate on her Raptor. Boomer is able to escape, as Adama cannot have her shot down without risk to Hera (TRS: "Someone to Watch Over Me").

Hera immediately misses her parents, tearfully and continually calling out for her mother. Boomer nearly forcefully sedates her to keep her quiet, but soon reconsiders, instead choosing to calm her with her projection ability (which Hera is discovered to share). Hera is brought to The Colony and handed over to Cavil (TRS: "Islanded in a Stream of Stars"). Cavil reveals to Boomer, who was reluctant to leave Hera (and vice-versa), that he plans to dissect and study her to discover the secret of her creation and use it to allow the Cylons to have hybrid children on their own and save their species.

Meanwhile, on Galactica, Karl and Sharon are devastated by their child's loss, with Sharon inconsolable and assuming Hera has already been dissected and killed by Cavil, but Karl, becoming increasingly unstable, still holds a shred of hope for seeing her again.

With Galactica dying, Adama assembles the crew for the ship's final mission; rescue Hera from Cavil (TRS: "Daybreak, Part I").

Boomer ultimately decides to kill the Simon operating on Hera and return her to her parents, who have boarded the Colony. Boomer is then killed by Athena after handing Hera back to her parents. Starbuck, Apollo, Helo, and Athena return to Galactica with Hera, but, after her father is shot by a Doral model, they lose track of her. The wounded Agathon then pleads with his wife to leave him and go find their daughter. Hera is sheltered by Roslin, and then by Caprica-Six and Baltar, who take her into CIC and protect her from Cavil, fulfilling the Opera House Prophecy.

Hera is among the survivors that settle on the new Earth, where she lives an agrarian and hunter/gatherer lifestyle with her parents in an area of Africa known later as Tanzania. She dies while a young woman. Her fossilized remains are discovered in 150,000 years and she is speculated to be the "Mitochondrial Eve", most recent common ancestress (when only purely female lines of descent are considered) of all living humans, by archaeologists from the Smithsonian Institute in Washington. Messenger Baltar and Messenger Six read an article about the discovery and indicate that the archaeologists' speculation is correct (TRS: "Daybreak, Part II").