Billy Keikeya was the Chief of Staff to President Laura Roslin following the initial Cylon attack. Despite his relative youth, Billy quickly proved himself as Laura's personal assistant; primarily due to his experiences with his school's debate team. Nevertheless, he was gifted and capable - and much more insightful than people might otherwise assume.

As a result of his abilities, Laura Roslin selects Keikeya to accompany her to the decommissioning ceremonies for the battlestar Galactica. During this time, he recognizes that not only is Roslin ill, she is in fact suffering from cancer (TRS: "Miniseries").

His parents had moved to Picon two months prior to the Cylon attack to be with Keikeya's sisters and their families. It is assumed they died there. Keikeya mentions he had a brother that also died on Picon (TRS: "Sacrifice").

Following the loss of President Richard Adar's cabinet, Roslin is sworn-in as President, and Keikeya finds himself promoted to the position senior aide to the President. One of his first tasks is to work with her to tally the number of survivors in the fleet (TRS: "33") and establish records for the dead. Later, he engages in attempts to get the 1,500 prisoners aboard the Astral Queen to help the Fleet obtain water supplies (TRS: "Bastille Day"), after Galactica's water supplies are sabotaged (TRS: "Water"). Despite his dubious mathematical aptitude (as shown in "33"), Keikeya is an exceptionally organized individual, who also acts as the senior spokesperson for Roslin's administration (TRS: "Litmus"). 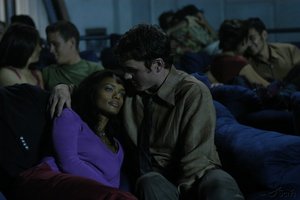 Billy Keikeya and Anastasia Dualla on a date in the forward observation lounge (TRS: "Tigh Me Up, Tigh Me Down")

Off-duty, Keikeya strikes up a friendship with Anastasia Dualla, a member of Galactica's CIC staff, which blossoms into romance (TRS: "Tigh Me Up, Tigh Me Down"), despite the fact that Dualla and Keikeya share irreconcilable viewpoints about Tom Zarek. Keikeya believes that Zarek was a prisoner of conscience who saw his fellow Sagittarons being mistreated by the other Colonies (TRS: "33").

As Roslin continues the unconventional treatment of her cancer, Keikeya's concerns increase. When she passes out due to an overdose of chamalla, he unknowingly makes a call for help on an open channel. The call is intercepted by the often irksome Colonial Press.

Later, he questions Roslin's hallucinations and her actions during her search for the Arrow of Apollo. He believes that her actions would irreparably damage the Colonial government (TRS: "Kobol's Last Gleaming, Part I"). Still, Keikeya stands by her side as Roslin and her personal security agents prepare to thwart Commander Adama's attempt to arrest her (TRS: "Kobol's Last Gleaming, Part II").

Roslin is arrested when she subverts the separation of military and civilian government by convincing Kara Thrace to purloin the captured Cylon Raider for a jump back to Caprica. Other government aides and officers such as Keikeya, Gaius Baltar and the members of the Quorum of Twelve are still free to do as they wished within the Fleet. Keikeya rarely leaves Roslin's side during her internment in Galactica's brig and routinely keeps her briefed on the deteriorating situation within the Fleet in the wake of the attempt on Commander Adama's life by a Cylon infiltrator.

When Lee Adama formulates a plan to break the President out of the brig and fly her to safety on Cloud 9, Keikeya is supportive of the effort, but ultimately does not follow her down the path she was about to take. The two part company in Galactica's hangar bay with Keikeya staying behind and Roslin hiding on other ships in the Fleet before Col. Tigh and Commander Adama can recapture her (TRS: "Resistance").

Galactica prepares for a return to Kobol to find President Roslin, who go there with over a third of the Fleet in search of the Tomb of Athena. Commander Adama brings Keikeya along with him and his insertion team because he feels that, aside from himself and Lee Adama, Keikeya is the only other person that Roslin will listen to. When Keikeya humbly denies the assumption that Roslin placed any stock in his opinions, Adama stuns him by saying Roslin feels that he would become President himself some day. Adama tells him that Roslin said he reminded her of former President Adar on his first campaign for public office. Keikeya had no idea how to respond to Adama's lofty comparison when Adama says, "Don't let it go to your head...Adar was a moron."

On the surface of Kobol, Keikeya reunites with Roslin. She is overjoyed to see him once again. Keikeya is also one of the few people to enter the Tomb of Athena and see the map to Earth (TRS: "Home, Part II").

Keikeya later proposes to Dualla, giving her his high school debate ring. However, she rejects his proposal. Later, Keikeya witnesses Dualla on a date with Lee Adama on Cloud 9. As Keikeya begins to criticize Dualla, the bar is taken hostage by a group of civilians demanding the transfer of Sharon Valerii into their custody. During a rescue attempt by Galactica marines, the terrorist Kern Vinson attempts to shoot Dualla. Keikeya knocks one terrorist aside, grabbing his gun and shoots Dualla's would-be murderer in the chest, killing him. Unfortunately, Vinson gets off a burst as he falls, mortally wounding Keikeya. President Roslin later tends to Keikeya's body in Galactica's morgue, crying that he was "so young" (TRS: "Sacrifice").