This is a general overview of the Number Two model line. For information on specific copies of Number Two, refer to the links in the article below.

"Number Two", better known as Leoben Conoy, is a humanoid Cylon first encountered at Ragnar Anchorage. He fancies himself as a prophet with predilections for enlightened monotheistic religion, whereas he is more likely to sow the seeds of doubt or mis-information, weaving lies in the fabric of truth and faith.

Number Two is first encountered at the Ragnar Anchorage, where he poses as an arms dealer and calls himself Leoben Conoy. It is likely that he was assigned with the monitoring of this depot station as the war began, gaining intelligence on battlestars that visited there. Alternatively, he may have been tasked with stealing away or destroying the ammunition (or the station itself) to prevent its use by the Colonials.

Conoy is already sick from the radiation around Ragnar, suggesting he had been there for several hours before Galactica's arrival. He becomes trapped aboard the station with Commander Adama after a warhead is accidentally detonated. As they try to find another way out of the station, Conoy reveals his true nature to Adama through conversation, initially by claiming to be something of a philosopher. Identifying Conoy as a Cylon on the point of death, Adama challenges him and learns of the Cylon's ability to transfer their consciousness to another body when dying. Only Leoben can't — the radiation of Ragnar is interfering with his ability as he appears to collapse.

A fight ensues, during which Conoy exhibits unnatural strength and speed. Adama manages to kill him by forcing his head over a venting steam pipe and then repeatedly bludgeoning the Cylon to death with a flashlight. He then brings Conoy's lifeless body back to Galactica for further examination. Samples from this body, when burned, reveal synthetic materials — which permit Adama, Colonel Tigh and Dr. Baltar to deduce that the Cylons could mimic humans in appearance (TRS: "Miniseries"). The corpse is later stored in the ship's morgue (TRS: "Flesh and Bone").

Not long after the Fleet's first encounter with a Number Two on Ragnar Anchorage, another copy is found stowing away aboard the Gemenon Traveler, interrogated by Kara Thrace and eventually executed on the order of President Roslin.

This Number Two becomes infatuated with Thrace, so that he kidnaps her during the occupation of New Caprica and uses psychological torture to convince her to love him ("Occupation" through "Exodus, Part II").

He later returns to propose an alliance between the Colonials and rebel Cylon faction and finds Kara Thrace's body with her during her search for the source of the transmission that led the fleet to Earth. (TRS: The Road Less Traveled, Sometimes a Great Notion)

An unknown entity that takes the form of Leoben Conoy guides Kara Thrace through her past and her unresolved issues with her long-dead mother, Socrata Thrace (TNS: "Maelstrom"). 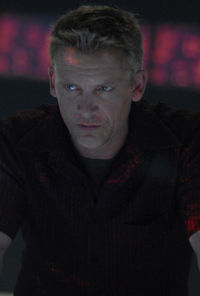 A copy of Two on a Cylon basestar

Three copies of Number Two are among the group of Cylons that rescue Aaron Doral, abandoned on Ragnar by the Colonials after Dr. Baltar fingers him as a humanoid Cylon, and debrief him (TRS: "Miniseries, Night 2").

The Caprica Resistance captured and interrogated their own copy of a Two, as Samuel Anders sarcastically quotes his philosophy to Kara Thrace (TRS: "Resistance").

A smattering of Twos are witnessed in the background of the park and cafe scenes in "Downloaded"[1].

Several Twos are present on the Cylon baseship that Gaius Baltar wakes up on shortly after he and the Cylons flee from New Caprica. Caprica-Six tells Baltar that his model believes the hybrid model who controls the baseship is speaking the "words of God" in her endlessly incoherent diagnostic babble (TRS: "Torn").

Another Two is recovered from an infected baseship by Galactica. He is going to be part of their plan to infect the entire Cylon race with the virus spawned from an ancient probe. However, he and the other Cylons captured by Galactica are killed by Karl Agathon before they are within download range of a Resurrection Ship. Because he is out of range, the death of this Two is permanent. In a deleted scene, Kara Thrace confronts this particular Two to ask about why Leoben took her prisoner on New Caprica. This one is either the same Two that she dealt with on New Caprica or is aware of his reasons as he answers as if it was him that did it. He explains that Leoben was looking for someone to love and for that person to love him back. He was willing to do anything for that to happen and brought in Kacey Brynn as an attempt to draw Thrace closer to him. He refuses to answer anymore questions even when a vaccine is promised to him if he does, but Simon (Number Four) offers to answer questions instead in exchange for the vaccine (TRS: "A Measure of Salvation").

At the standoff between Galactica and several basestars over the algae planet, a Two states that the Temple of Five and Eye of Jupiter are far too important to be risked over the testing of Adama's bluff to nuke the planet (TRS: "The Eye of Jupiter").

After the Battle of the Ionian Nebula, the Twos vote with the Sixes and Eights to put a stop to Number One's lobotomization of the Raiders, who refuse to fight for fear of harming the Final Five (TRS: "Six of One") after a Raider's detection of one in the Colonial Fleet (TRS: "He That Believeth In Me"). From then on, the Twos are part of Natalie's faction in the ensuing schism between the Seven.

One Two, either the main one that is obsessed with Starbuck or another one (it's not known for sure) aids Laura Roslin during Gaeta's Mutiny. After she tries and repeatedly fails to break through Galactica's jamming to broadcast a message to the Fleet, he uses some sort of device to help her break the jamming and transmit after she convinces the Cylons to aid her and Admiral Adama rather than run. When she succedes he tells her that he thought the device he used would do the trick and allow her to penetrate the jamming (TRS: "Blood on the Scales").

A copy of the Two model is seen on the new planet with the Colonials, agreeing to remain with them to "see what good they can do before they pass into God's hands". It is not known how many survived. (TRS: "Daybreak, Part II")