Colonial One, formerly Colonial Heavy 798, is an Eversun starliner now used as the seat of government for the President of the Twelve Colonies of Kobol. Colonial One is the civilian counterpart to the military leadership aboard the battlestar Galactica. 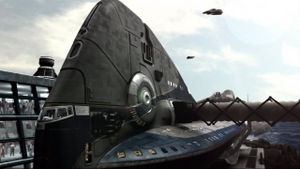 Prior to the Fall, the Colonial Government chartered the starliner for ferrying Secretary of Education Laura Roslin, her staff, and members of the Colonial press to and from the decommissioning ceremonies for the battlestar Galactica.[1] Roslin departs the pre-attack seat of Colonial power, Caprica, shortly after her briefing on the teachers' strike with President Richard Adar (TRS: "Epiphanies").

Galactica's Decommissioning Ceremony and Destruction of the Colonies

Approximately 3 hours from Caprica, the Cylon attack commences. Colonial Heavy 798 and Colonial press members hear of news that Caprica has been nuked along with three other Colonies. Secretary Roslin, as the highest government official on board, takes charge of the situation by setting up Colonial Heavy 798 for long term use. Shortly after this news, a single Raider attacks Colonial Heavy 798. Lee Adama is able to decoy a missile that targets the starliner and shoots it down. His Viper is damaged in the process, but Colonial Heavy 798 recovers the Viper into its cargo bay (TRS: "Miniseries").

Roslin being sworn in

A special automated government broadcast prompts Laura Roslin to send her government ID ("D-456-345-A") number to locate surviving officials. With no more senior Colonial government officials apparently left alive, Laura Roslin is quickly sworn-in as the new President of the Colonies aboard[2], and Colonial Heavy 798 is re-designated Colonial One, in recognition of its status as the President's spacecraft.

With nowhere else to go, Colonial One engages in rescue missions under the direct orders of the new President. Colonial One locates and gathers other civilian vessels marooned in space around the vicinity of Caprica. During their rescues, Colonial One receives a message from Galactica: Regroup at Ragnar Anchorage. Roslin attempts to countermand Commander Adama, ordering his battlestar to aid in rescue operations instead. Before the situation can be resolved, another Cylon Raider jumps in and launches nuclear missiles at the small gathering of ships where Colonial One is assisting. Lee Adama saves the day once more using Galactica's old EMP coils to disable the missiles and fool the Cylons in thinking the small fleet was destroyed. Faced with the threat of further Cylon forces coming, Laura Roslin is forced to order all FTL capable vessels to jump to Ragnar Anchorage, leaving the sublight vessels behind where they are destroyed by the Cylons. The exact number of casualties from this action is unknown, but believed to be in the several thousands.

While this ordinary starliner probably lacks many of the facilities and systems the original Colonial One would have boasted, President Roslin nevertheless made it her base of operations during her term as Colonial President as did her successor President Gaius Baltar. Locating the administration aboard a civilian craft and not the arguably more logical choice of the battlestar Galactica helps to keep the civilian administration figuratively distinct as well as physically separate from William Adama's military leadership. As well, Colonial One's security is handled by the Presidential security service, which is independent of the military leadership.

Colonial One on New Caprica

Baltar continued to use Colonial One as base of operations for his administration, even going so far as to land Colonial One on the surface of New Caprica on a hilltop overlooking the new settlement. From here he could oversee the colonization of the planet, while the ship itself could act as a visual symbol of the presidency and de facto office building for the administration.

A year after his election, President Baltar had all but done away with the modesty of Roslin's office on the ship. He remade it to resemble his old house on Caprica, replacing Roslin's simple desk with an extravagant wood desk, her office chair with a decorated leather seat, and her back office with an apparent sleeping chambers for his harem. He removed the white board with its population-count as well as the image of a rescue worker given to Roslin following the exodus. The white board was replaced with a picture of himself (in a sense symbolically laying his own ego over his responsibility to protect the people).

The Occupation of New Caprica

A year after the discovery of the planet, New Caprica is detected and occupied by the Cylons (TRS: "Lay Down Your Burdens, Part II"). A Cylon "advisory committee" made up of representatives of each of the revealed Cylon models join Baltar aboard Colonial One, although it's unclear whether they physically live aboard the vessel (more likely they lived in the Cylon-built administration and jail complex nearby). The Cylon committee forms the real government of New Caprica while Baltar's administration is reduced to no more than a puppet regime maintained to put a human face on increasingly horrific Cylon actions. These actions force many to resist the administration, including Felix Gaeta who uses his access to Colonial One to acquire information that can aid the growing human insurrection movement. Eventually the resistance stages a series of major strikes that, with the aid of Admiral Adama and the battlestars Galactica and Pegasus, force the Cylons and Baltar to abandon the colony during the Battle of New Caprica.

During the operation, the deserted vessel is boarded by former president Laura Roslin and a small force under her command as Roslin claims the ship as hers (probably due both to how long she'd lived there, and her leadership of the resistance; Vice President Zarek tacitly acknowledges her de facto supremacy by not contradict her and by assigning Jammer to protect her while wishing her good luck). Utilizing launch keys covertly obtained by Sharon Agathon, the force are able to re-activate Colonial One's launch thrusters and FTL drive and flee from New Caprica along with the remaining colonists. Colonial One is the last human ship to leave the planet.

There and Back Again: President Roslin's Second Administration

With President Baltar having either died or abandoned his office, Vice President Tom Zarek assumes the presidency and reigns briefly aboard Colonial One; whether or not Laura Roslin resided in the ship during the interim Zarek presidency is unclear. Zarek knows that he lacks the military's allegiance and that the will of the people is for Roslin to govern. The principal activities of the Zarak's caretaker administration appear to be effecting a smooth and legal transition to second Roslin administration and the swift and secret adjudication of a number of collaboration and treason cases, claimed to save Roslin and the population from months of painful and divisive "witch hunts". Laura Roslin, through an appointment-and-succession deal with Tom Zarek, once again takes office as Colonial President with Zarek as her Vice President. The ship is subsequently re-established as the center of the civilian government and resumes its fleet position traveling near Galactica (TRS: "Collaborators"). With Cloud Nine destroyed, Quorum meetings are held aboard Colonial One from there on.

When redecorating and cleaning the office after Baltar's opulent reign, Roslin and Foster joke about hanging Baltar's portrait in the bathroom over the toilet as they feel that this is the only place where it belongs (TRS: "Hero").

During a routine patrol around the Fleet, a Raptor manned by Margaret Edmondson and Hamish McCall loses flight control due to impurities in its tylium fuel. Unable to regain control and on a collision course with Colonial One, the two pilots are forced to eject from the Raptor, which impacts the larger vessel near Roslin's office. The accident results in several injuries, but no fatalities. The hull damage forces Roslin and her staff to move to another part of the ship until repairs can be made (TRS: "Dirty Hands").

During the Battle of the Ionian Nebula Colonial One is nearly destroyed by a Cylon missile. The missile is intercepted moments before impact by a quick-thinking Seelix, who is taking part in active combat for the first time (TRS: "He That Believeth in Me").

In the weeks preceding Gaeta's Mutiny, Roslin used Colonial One less and less, in part due to the necessity of being aboard Galactica for medical treatment. Following the mutiny, during which a massacre of the Quorum of Twelve had occurred on Colonial One, and with her own health deteriorating, Roslin effectively moved government operations to Galactica (TRS: "Deadlock", "Islanded in a Stream of Stars"). Despite this, there is no indication that Galactica has adopted the Colonial One call-sign, nor is there any indication that the Rebel basestar adopted the call-sign when President Lampkin and Admiral Hoshi move the fleet leadership there. Colonial One, along with all the surviving ships in the fleet is later flown via remote control by Samuel Anders into the New Earth's sun. (TRS: "Daybreak, Part II"). 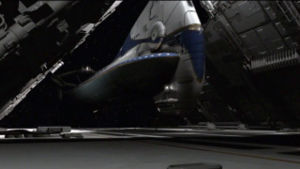 Colonial One is small enough to fit inside of Galactica's flight pod (TRS: "Water"). This makes Galactica a "safe haven" and also reduces contact with outsiders who would otherwise have the chance to make a move on the important visitors that frequently come and go from Colonial One.

A large main cabin aboard the ship provides seating accommodation for dignitaries and press alike, while forward of this are small, more personal quarters reserved for ministers and their guests. Despite its conversion for government use, Colonial One retains its own docking bay, large enough to take a Colonial shuttle, and also boasts a cargo hold big enough to house a Viper-sized craft. Additionally, the ship boasts at least four cargo bays, three of which were converted to hold passengers (TRS: "Miniseries").

Following the destruction of the Colonies, the ship's normal passenger capacity was reduced to accommodate the offices and cabins required by government personnel. Civilian passengers on Colonial One resided in converted sections of the liner. However, the configuration of passenger accommodations seems likely to have changed following the events of the Battle of New Caprica and the abandonment the human colony there. Colonial One appears to be carrying a larger complement of civilians, just as Galactica is carrying a larger crew of military personnel (from the destroyed Pegasus) mixed with civilians. For example, as Roslin negotiates with Tom Zarek over his future role in the presidential administration, two children are playing in a corner of the President's office. This overcrowding is presumably due to the loss of several ships before and during the evacuation of New Caprica, as well as the need to spread out the remaining population among the existing ships. 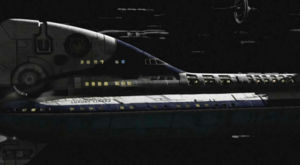 Colonial One sporting the Colonial seal in "Kobol's Last Gleaming, Part I".