The name "Simon" redirects here. For other people that share the same name, see: Simon (disambiguation).

"Number Four"[1], also referred to by his human name Simon O'Neill, is a humanoid Cylon that speaks calmly and purposefully, and tends to use logic as a means for his operation or resolving issues (TRS: "Torn"), and is not as religious as his counterparts.[2] This model appears to be the medical specialist of the Cylons and also takes on the role of a doctor or medic when functioning as an infiltrator (TRS: "The Farm", "Six of One", "The Plan"). Apparently the infiltrators of this type are more likely to use their medical skills subversively than to engage in direct combat.

One copy of this model, calling himself "Simon," cares for Kara Thrace as a medical doctor after she is shot in a Cylon ambush. Simon tries to casually persuade Thrace into bearing children but is unsuccessful. When his diplomatic efforts fail, he surgically explores her ovaries without Thrace's permission, either partially removing an ovary or its eggs. On orders from a copy of Number Six, Four arranges a time to surgically remove Thrace's ovaries. Before Simon can sedate her again and remove her ovaries, Thrace's suspicion that he is a Cylon is confirmed. In conversation he uses her call sign, which she never mentioned in his presence. Thrace kills him and escapes from the farm. Moments later, another copy intercepts Thrace just as she exits the building reaches the outside of the compound. Before he can speak further, members of the Resistance immediately kill him as they storm the farm to liberate Thrace (TRS: "The Farm").

One copy infiltrates the human Fleet as a married man and has a step-daughter. He is very reluctant to harm the humans as he is now sympathetic to them. He truly loves his family and has trouble carrying out Cavil's orders to blow up the ship he lives on. He freaks out his wife Giana O'Neill who temporarily leaves him and he then agrees to carry out Cavil's order if his family is spared, but Cavil refuses. After one final sexual encounter with his wife, he kills himself by airlocking himself after leaving a suicide note, not wanting to betray his family. He does this while outside of resurrection range and his death is thus final.

Giana later learns the truth about him when Kara Thrace returns to the Fleet with information about his model, and Giana sees the picture of another copy in an old newspaper article. Galen Tyrol comforts her by correctly pointing out that Simon killed himself rather than doing anything against the Fleet (TRS: "The Plan").

Yet another copy is the doctor of the Caprica Buccaneers. He is well aware of his identity as a Cylon, but he is unaware of the true nature of Samuel Anders and thus is puzzled by Cavil's interest in Anders. He does his part to undermine the resistance by giving too much morpha out and contaminating anti-radiation meds, but is unable to do anything against the Resistance without compromising his cover as their doctor. When Kara Thrace and Karl Agathon show up, he hides himself from them in fear that they will recognize him as a Cylon and apparently arranges to have Thrace sent to a farm. He gets frustrated with the Cavil copy that joins them as Cavil won't reveal their location to the Cylons, wanting to hear Anders' confession (in reality wanting to see if he learned his "lesson"). This copy of Simon is exposed when the resistance kill another copy during Kara Thrace's rescue and recognize him as identical to their Simon. Anders sends Jean Barolay back to kill him (TRS: "The Plan")[3].

A Four captured on an infected basestar near the Lion's Head Nebula is interrogated on Galactica. He reveals information about the ship and the Cylons' motives for abandoning it, in exchange for a cure promised by the humans. However, there is no cure, only a treatment. This Four is permanently killed when Karl Agathon sabotages the environmental control system, killing the Cylon prisoners to stop them from being used as biological weapons (TRS: "A Measure of Salvation"). 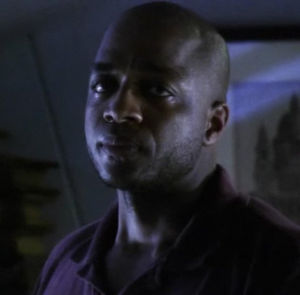 At least one other copy operates on Cylon-occupied Caprica (TRS: "Downloaded"). A Four is present in President Baltar's office during the Battle of New Caprica (TRS: "Exodus, Part II").

One Four, assigned as part of one basestar's command crew that witnesses a sister basestar's plight, determines that a decision to rescue the infected basestar cannot be reached scientifically (TRS: "Torn").

A Four performs a lobotomy on a Raider, which this model votes for. At least two of these models are slain by Centurions, along with two Fives and a One (TRS: "Six of One"). The Fours fall under Cavil's banner in the Cylon Civil War. A team of Fours on board Cavil's Basestar were prepared to operate on Ellen Tigh's brain to learn the secrets of resurrection (mentioned but not seen, "No Exit"). Later, a copy is shown aboard The Colony preparing the examination of Hera (TRS: "Daybreak, Part I").

A copy, possibly the same one, is killed by Boomer when she rescues Hera. Several Number Fours are among the boarding party led by John Cavil that storms Galactica during the assault on The Colony. One assaults the CIC directly with Cavil and a Five. The Four is mortally wounded, possibly by Admiral William Adama and is left standing gasping for breath before Adama kicks him down. After a tenuous truce is declared, one Four oversees the transfer of resurrection data from the Final Five to the Colony Hybrids, but when the truce is broken when Galen Tyrol kills Tory Foster the Four in the CIC quickly opens fire with another Five. He is quickly killed by Kara Thrace. The remaining Fours aboard the Colony all perish when it falls into the naked singularity it was orbiting and is obliterated (TRS: "Daybreak, Part II").