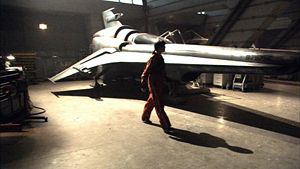 Viper 8757 in Galactica's hangar deck with Specialist Henderson (TRS: "Lay Down Your Burdens, Part I").

Viper 8757NC is the designation of two Vipers, one Mark II and one Mark VII, assigned to Galactica.

The Viper Mark VII version appears in "Lay Down Your Burdens, Part I". 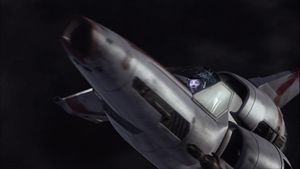 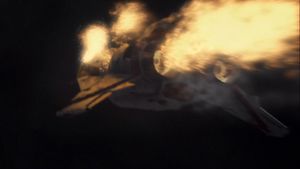 A Viper Mark II of the same designation is flown by Kara Thrace during a Combat Air Patrol protecting a Fleet underway replenishment operation. This Viper is the one Thrace is later lost in, crushed by intense atmospheric pressure (TRS: "Maelstrom"). Over two months later, Thrace returns under mysterious circumstances in a remarkably pristine version of this Viper. She claims to have been to Earth and that only a few hours passed for her, but has no recollection of how she got there or how she survived ("Crossroads, Part II", "He That Believeth In Me").

An inspection of the Viper determines that the Viper seems to be as factory new as it looks. Similar to Thrace's memory loss, the navigation computer contains no data. Over the next few months, the Viper sits on the hangar deck, occasionally looked at to try to reveal its secrets. It isn't until three of the Final Five Cylons are mysteriously drawn to the craft that Kara Thrace finds a clue to Earth in the craft itself. After powering up the systems, she uses the radio detector to find a strange signal that is only received by this Viper. With the signal's bearing the Fleet is able to plot a series of FTL jumps which eventually lead it to Earth (TRS: "Revelations").

As Thrace and a Number Two search Earth's surface for the source of the signal, they discover it to be a standard Colonial emergency transponder. Further searching in the area reveals the remains of a Viper Mark II's tail section with 757NC visible. Concerned, Thrace and Leoben continue the hunt. They find the most of the rest of the Viper. A skeletal corpse in a Colonial flightsuit is found in the cockpit. When the corpse's helmet is removed, it is revealed to have blonde hair cut in a short bob. The corpse's dogtags confirm it to be Thrace's corpse. With Ellen Tigh revealed to be the remaining Cylon, it is now even more unclear as to who and/or what Kara Thrace is (TRS: "Sometimes a Great Notion").