Aboard Galactica, final preparations are made for the mission...

Adama in CIC during the Battle of the Colony. Note the extra cables near the control console which connect the ship's systems to Anders.

Galactica suffers massive hull damage as she completes the jump from the Colony.

A crippled Galactica seen in orbit over the Sahara Desert.

The fleet heading straight into the Sun. 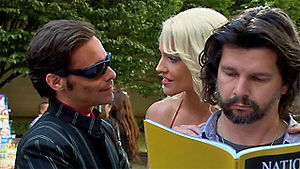 Angels Baltar and Six...and a man reading National Geographic. The man is played by Ronald D. Moore, creator of the series.

Who and what guided them

The linked graphic omits the first and last note of the theme, but both can be heard in the soundtrack during the jump montage. The second "five" (in the third chunk of four digits) corresponds to the tuplet G#/A/G#, effectively omitting the trill up to high A. Every note has the same duration except for the last two, which are twice the length of the others.

Reproduction of the Races

Messenger Baltar (moving in closer to V-Six, whispers): "You know it doesn't like that name!"
Messenger Six (Doesn't answer vocally but her expression says "C'mon! you know better than that!"): ...........
Messenger Baltar (Seeing her reaction): "Silly Me.....silly, silly me."

William Adama: "Just so there'll be no misunderstandings later . . . Galactica has seen a lot of history, gone through a lot of battles. This will be her last. She will not fail us if we do not fail her. If we succeed in our mission, Galactica will bring us home. If we don't . . . it doesn’t matter anyway. Action stations!"

Tory Foster (hesitantly with slight fear): "There are things that....that we've all done. Certain things that...people would be shocked.... to learn about."
Cavil (shouting): "HEY! I DON'T MEAN TO RUSH YOU BUT YOU ARE KEEPING TWO CIVILIZATIONS WAITING!"
Tory Foster (voice trembling slightly): Let's....Let's just all agree that no matter what we learn about each other...we're all Cylons and we're all capable of making mistakes."
(Those were her last words. Less than two minutes later, Tyrol learns of Tory murdering Cally and kills Tory by snapping her neck. She was being strangled too tightly to say anything else.)

Starbuck: "There must be some kind of way out of here!"

Messenger Six: "All of this has happened before..."
Messenger Baltar: "But the question remains: does all of this have to happen again?"

Samuel Anders: "See you on the other side."

Ellen Tigh: Tonight, we are going to celebrate your retirement and all the time I'm gonna get to spend with my husband! [She kisses him.]
Saul Tigh: Are you good with that?
Ellen Tigh: Ohhhhh... Saul! All I've ever wanted was to be with you. Not just weekend liberties or...or two weeks' leave a year. I mean full-time, you and me. Together, in a...in a house, in a tent...homeless and on the street... just be together.

William Adama: Earth is a dream...one we've been chasing for a long time. We've earned it. This is Earth.

Baltar: "You know, I know about farming." (sobs)

William Adama: "I laid out the cabin today. It's gonna have an easterly view. You should see the light that we get here. When the sun comes from behind the mountains, it's almost heavenly. It reminds me of you."

Boomer (to Athena): "Tell the old man, I owed him one."
Athena (angrily) "Doesn't change anything you did though!"
Boomer (shakes her head slightly): "No. We all make our choices. Today I made a choice. I think it's my last one."
Starbuck: "All right this is really touching. Now can we get the frak out of here!?!"
Boomer (to Starbuck): "You should know that your Raptor been destroyed. You can't go back that way."
(Athena passes Hera to Helo)
Athena: "Yeah well, that is not the plan."
Starbuck (sardonically): "Can we not tell her the plan?"
Athena: "Right."
(Athena and Boomer look each other in the eye for a moment. Athena raises her weapon. Boomer does not try to flee, accepting, if not welcoming her fate. Athena fires. Boomer is dead before she hits the deck.)

Cavil: "This makes it alot easier. I just take the girl and I'm out of here!"
William Adama: (with a gun trained on Cavil) "Not a chance!"
Number Six: "Cavil, we won't let you take Hera. You know that."
Cavil: "I know nothing of the kind. I know I'm going to watch you chase your tail across the universe for another four years."
Tigh: "That's not going to happen!"
Cavil: "This thing is the key to my people's survival, and I'm not leaving without it!"
Baltar: "Hera's not a thing! She's a child, and she holds the key to humanity's survival as well!"
Cavil: "And how do you know that?"
Baltar: [glances briefly at the illusory images of Messenger Six and Messenger Baltar] "I see angels, angels in this very room. Now, I may be mad, but that doesn't mean that I'm not right. Because there's another force at work here. There always has been. It's undeniable. We've all experienced it. Everyone in this room has witnessed events that they can't fathom, let alone explain by rational means. Puzzles deciphered in prophecy. Dreams given to a chosen few. Our loved ones, dead, risen. Weather we want to call that "God" or "gods" or some sublime inspiration or a devine force we can't know or understand, it doesn't matter. It doesn't matter. It's here. It exists, and our two destinies are entwined in its force."
Cavil: "If that were true, and that's a big 'if', how do I know this force has our best interests in mind? How do you know that God is on your side, Doctor?"
Baltar: "I don't. God's not on anyone side. God is a force of nature, beyond good and evil. Good and evil, we created those. You wanna break the cycle? Break the cycle of birth? Death? Rebirth? destruction? Escape? Death? Well, that's in our hands, in our hands only. It requires that we live in hope, not fear."

Lee Adama: "If there's one thing that we should have learned, it's that . . . you know, our brains have always outraced our hearts. Our science charges ahead, but our souls lag behind. Let's start anew."